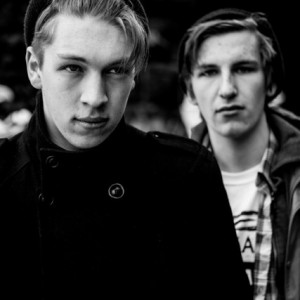 The visceral, opening one-two punch of “Bloodsports” and “Backwaters” announced Drenge as one of the best and most exciting new bands on the UK music scene right now. Even though only comprising of sibling duo Rory and Eoin Loveless, they play with enough raw enthusiasm and velocity, enough no holds barred energy and contagiousness that their music never becomes anything less than wholly and compulsively thrilling.

If the pair of singles were the battlecry, this, their debut full length LP, is their mission statement, an A-Z of the most exhilarating chapters of punk rock whittled down to its leanest, meanest, no-frills essence;12 razor sharp tracks that jolt you to life even as they seize the brain with their terminally catchy melodies and jagged hooks. Songs like “Face Like a Skull” and “Nothing” speed by recklessly in a dizzying blur of white heat and seething riffs, while others, like raucous fan favourites “People in Love Make Me Feel Yuck” and “Dogmeat” come across as relentless shots of adrenalin straight to the cerebral cortex, so anthemic, rapturous and stuffed full of ringing guitar chords and deadpan lyricism are they. Then, on the other hand, we have the album closer “Fuckabout” which, despite what the title might have you believe, actually showcases Drenge’s lesser seen tender side, as Eoin bemoans his chequered romantic history. It’s a (slightly) quieter moment in the album to be sure, but one that nevertheless goes straight for your gut.

Even though the duo are barely in their 20s, they have accumulated enough confidence, vim and vigour in their music to sweep any discerning listener off their feet. Hold on to your hats: you’ll be swept up too.