Katie Alice Greer has shared new single, “Dreamt I Talk To Horses.” The track is off her debut solo record Barbarism, available June 24th, 2022 via FourFour/Sister Polygon. The song follows lead single “FITS/My Love Can’t Be” and its Network inspired video which came with the album’s announcement in April.

Katie Alice Greer shares: “This was one of the last songs I finished on the record. It was originally 8 minutes long, way slower, and had a lot more reverb and noise. When I finally let go and re-recorded it, something totally different came out pretty organically. It seems hilarious now but initially when I finished this track I sent it to some friends saying I thought this was me finally going into straight forward pop territory, that it was “my Drake song,” and pretty much all of them told me it is still way too weird to sound like Drake. But, I hope people hear something they can connect with in it. It’s about confronting all of the hard feelings that come with loving people, even, and maybe especially, when things are not gonna work out and you need to go your own way.”

Written, performed, produced, and mixed entirely by Greer, Barbarism, utilizes strange and bizarre sonic templates as much as it succumbs to them. With production grinding, lurching, and practically unraveling beneath it, Greer’s voice acts as the listener’s guide, unafraid to lead them into uncharted, uncomfortable territory. Her references are equally diverse, from Network to Dorothea Lasky to The Twilight Zone to RZA, but it’s all united under Greer’s particular vision. 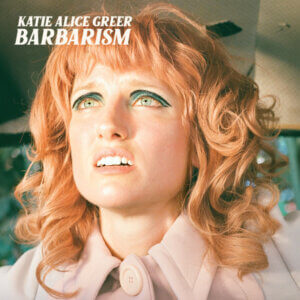