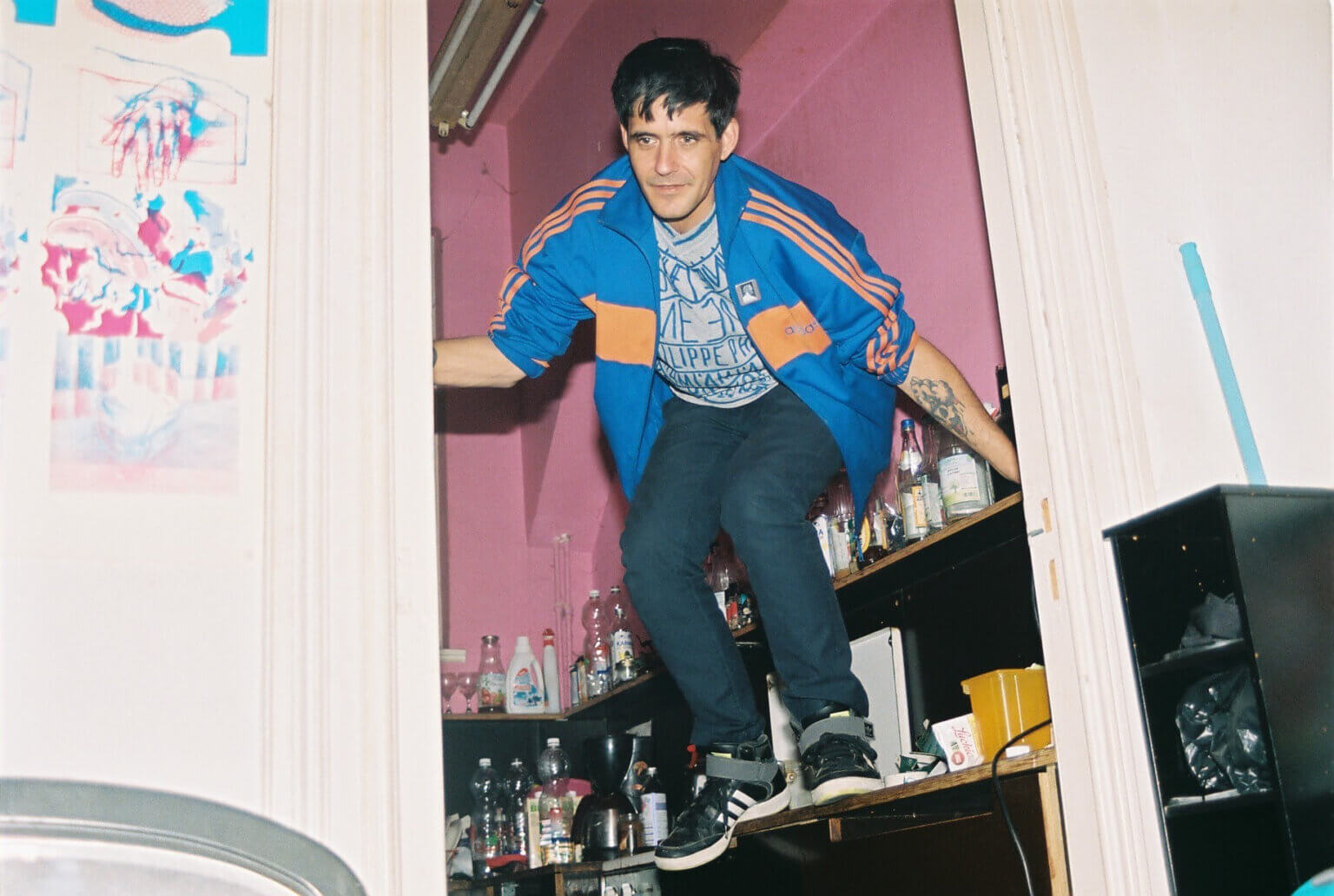 High With The People, is the debut album of Rodolphe Coster and Band. The album was recorded at the legendary Studio G in Brooklyn was produced by Matt Jones of Male Gaze and brings together Jeff Tobias (Sunwatchers), Sarah Register (Lou Reed, Depeche Mode, Protomartyr), Atsuko Hatano, (Jim O’ rourke) and Maya Postepski (The Organ) among others.

Rodolphe Coster was part of several artistic collectives and rock groups and worked extensively as a composer and performer for contemporary dance projects that allowed him to travel the world. It was during these trips that he met the collaborators who form his current entourage. Over the past 5 years, the Brussels artist has performed in Canada, Europe, the United States and Japan and has opened for Black Dice, Grimes, Molly Nilsson, Liars, Italia 90 and Thee Oh Sees, among others.

HIGH WITH THE PEOPLE – The Story

In 2016 , I got involved in the creation of a dance performance project as a composer. STROKE was the name of it. Two dancers plus me. At that time I had already toured in Japan and Europe with my music as a solo perfomer, with my songs.

STROKE met a certain success. I got an award for the music (best composer of 2016 performing arts section) by Author-composer copyright society of Belgium and we got booked more and more. As one of the dancers was from Montreal, we got proposals for performing there. At that time I had never performed my own songs in North America, but only in Belgium, Italy, Berlin, Japan, China, Holland and France. I thought I could manage to try out a solo tour just after the dance dates. That’s what I did. I wrote to some of my contacts and I could manage to have a gig in a University Radio in Chicago (Dara Sessions) a gig in Los Angeles in the atelier of the Artist Oscar Tuazon, A gig in New Orleans in the Mudlark Theater, and three gigs in New York , two in Brooklyn (Troost and Trans-pecos) and one in Manhattan (Piano’s) plus a radio show at The Lot Radio, for finally ending the tour in Montreal with a gig at L’Escogriffe.

Chicago was so Sweet, There is still a video of it. , Los Angeles was such a trip, an important one. Why? Actually the concert was a bit of a private one in two thousands square meters atelier of Tuazon, with a huge cylinder in the middle as a sculpture. We invited a few people from my L.A. relatives among which was Matt Jones. I had met Matt in Brussels while I was promoting concerts in a small club called LE CHAFF. I had booked his band MALE GAZE. And we had remained in touch as I sincerely LOVED the Music of the band, and as I was talking with Matt I could feel a connection. The concert at the Atelier in LA was a real performance. We put the amp in the cylinder. The 6 people audience was on one side of the cylinder and I was on the other side. We turned off the Light, and we introduced a car in the place with the flashing lights on. 25 min really noise Music. Then Matt came to me and said , man, « Your gig was a blast. What are you doin tomorrow? Let’s meet ! Come home for dinner and then let’ s hang out and you can sleep home and I’ll drive you to the Greyhound station. So the Day after we met, He cooked some pasta, we talked endlessly about Music. After dinner, we drove down to meet some of his friends, he showed them what he had filmed of the concert at the art atelier. Then we all drove to Non Plus Ultra concert venue, and again, he showed the film and we’ve met some of his buddies there : the Sunwatchers’s Jim Mc Hugh and Jeff Tobias, They were performing in the club with a side project of theirs. I had the feeling i had met a new and important friend in the name of Matt.

This tour did continue, by New Orleans ‘s Mudlark Theater where I’ve also met beautiful fellas, and then I had this crazy no money bus trip from New Orleans to Atlanta to Washington To New York not sleeping any where else than in the bus.

Arriving in New York, around early afternoon, I had to contact my host. Indeed, i had met a few months before a Rapper from NYC called PRINCE HARVEY. We got a cool contact, and when i decided to organize that tour, i wrote him to ask if it was ok to sleep at his place, and he said yes. . We also had to organize the second of my concerts there in New York, the TRANS Pecos one as they’ve asked me to add on the Bill some New York artists. I asked Prince if he was ok to play and he said ok just if I could play the séquences from my Ableton while he would rap. This because he had no computer at that time. Thing was that Prince had some issues about his home, his rent etc… and told me last minute that for some unexpected reasons he couldn’t offer me the sleeping. Not knowing where to sleep I then posted some words about It on Facebook in case any one could help. I received a réaction from french Musician, based in Brussels, Antoine Pasqualini aka Monolithe Noir, writing me that one of his old time Friend was Sound Engineer in New York and that in this emergency situation I could write him for the sleep issue The dude name was Alexis Berthelot. I did write straight away to Alexis before goin to TRoost where i had to perform my first gig. Alexis said it was No problem for me to sleep at His place, just he couldn’t come to the concert at Troost but that he was not living far, in Bushwick. After the concert I got to Alexis’s home, and we briefly met before planning a Coffee the next morning. Again, as what happened with Matt, i sincerely felt a connection. We chatted together about Music, culture, women, of course that was for me the first time for a while that I could speak french. And for him too. Alexis said to me he would come to the concert at the TRanspecos, and that I could sleep at his place during all of my New York stay. At that Time he was kinda discrete about his job, he just told me he was workin in a studio in Brooklyn. The TRANS Pecos concert was WILD. . After the concert he came and said : « man, I loved this so much, we have to visit the studio where I work, please Come there tomorrow i’ll introduce you to people there. I felt he was really enjoying the music I had made. I felt he was sincere. The Day after the TRanspecos concert was The Lot Radio session, and the studio, named STUDIO G is located just one street away. I went to visit the studio with Alexis. I could not realize how intense was the work there. How intense were the people workin there . Ok! That’s where Genesis P.ORRIDGE is hanging out ! Ok there are some Sparklehorse ‘s Mark Linkous words on a sheet of paper framed on a wall. Ok that ‘s PÈRE UBU ‘s Tony Maimone Studio ! Ok that ‘s Joel Hamilton studio , Joël friend of Tom Waits, of Mike Patton and colleague of PJ Harvery and David Friedmann on Sparklehorse’s “It’s A Wonderful Life”, engineer of RZA and Black Keys among So many. I was just dreaming awake.

After the visit Alexis told me : « man, if you come back, we book the studio and we record an album with your music. We ask musicians and we do it right ? » In a certain way, Alexis had just written the first lines of High With The People.

More than 6 months later, STROKE , the dance performance was booked again in Montreal for a series of performances in 2018. It meant there was an opportunity for me to go back to Brooklyn and actually record the album ! I immidialtely wrote Alexis and he booked the studio. I also wrote Matt Jones to ask if he would agree to be the music producer of the record and he accepted.

I asked my friend Maya Postepski with whom i had just performed as support act for LIARS if she was ok to play the drums. She was in and enthusiastic as she was living in Toronto at that time. Finally I asked my friends of the girl band BOY TOY if they would be ok to sing the backing vocals (I love them so much).

From then on, my team was ready.

We planned a week of recording after the dance gigs in Montreal.

But I was feeling as If I was still missing one side of the adventure. I was missing my japanese connection, and as i wanted to work some strings arrangements and as i could ask the support of the Botanique (cultural venue in Brussels long time supporters of my work) I managed to bring in Atsuko Hatano, genius violonist from Tokyo who I had played with during my last japanese tour, and who is known as the violonist of Jim O Rourke. We did the recording session in New York with the band I mentioned and It was a great thrill. Atsuko wrote the scores in Japan came later to Brussels to record the strings with Ensemble Musiques Nouvelles. That was It : five days of recordings in New York, back to Brussels recording Atsuko scores in an afternoon at Studio Dada. Then, we all had a nine months break before the mixing session at Studio G. That was made by Matt, Alexis and me.

During the mixing session we went deep into the meaning of the record. At that time, I was fascinated by Fred Hampton and all ha accomplished as chairman for the Black Panthers i thought he was probably the most brilliant human of all time. On an famous public speech, Fred said he wanted to feel himself “High Off The People”, I thought I could give a echo this thought by naming my album “High With The People” which is all about what happened in the making of the album. Another artist very dear to me is Jeremy Deller. I encountered his work thanks to an exhibition called « Joy in People » that took place at Wiels in Brussels. I thought the circulation was all about that, the people, I thought the music was all about that as well, from my demos to the album it was all about The People.

I would also add that the album was mastered by the great artist Sarah Register. Alexis suggested her even though he didn’t know her so well, but her CV spoke for herself. She’s worked with Lou Reed, Depeche Mode, David Bowie, Protomartyr… She had experience as Musician, also in performing arts, she had an awesome band with her partner TALK NORMAL, that i loved as soon as I listened the Music. Sarah wrote me she liked the Music , she wanted to be supportive and accepted to be the final painter of this record. The mastering helped the entire record, the guitars got a real body, the deep work of Matt and Alexis was gorgeously enhanced. We finally met Sarah and I when she came in Brussels to play with Kim Gordon, And I Must say I am so happy that this beautiful team could be completed by her.

Rodolphe Coster and Band
High With The People
Tracklisting 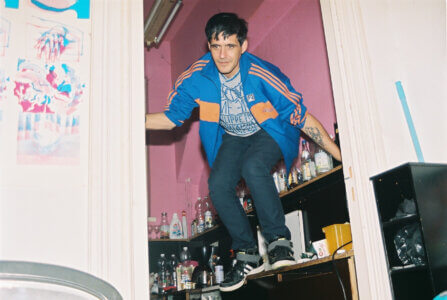