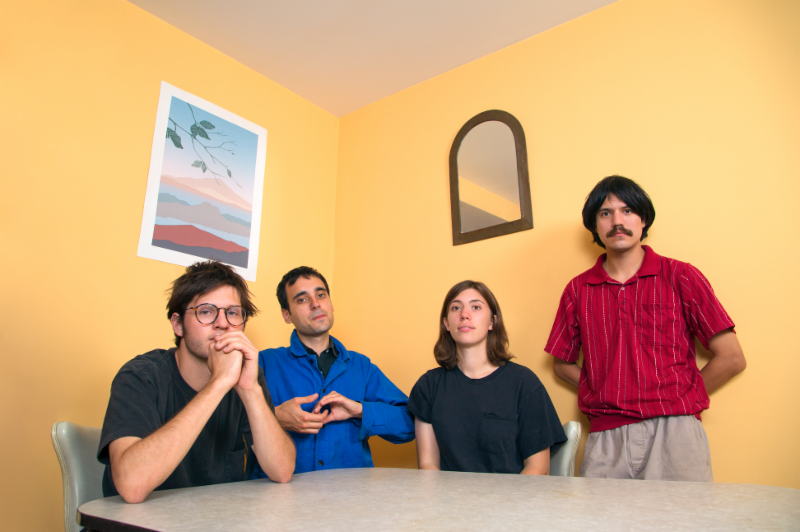 Recently, Palm released “Dog Milk,” the new single off their forthcoming release Rock Island. Rock Island comes out on February 9th via Carpark Records. Palm has announced a 2018 tour with support from The Spirit of the Beehive, including an album release show at Brooklyn’s Market Hotel.

Working again with engineer Matt Labozza, the band spent the better part of a month in a rented farmhouse in Upstate New York. With the benefits of time and space, Palm recorded the various elements piecemeal, only rarely playing together in groups larger than two or three. While some members tracked, others holed up in the next room, experimenting with quantization, beat replacement, and other methods borrowed from electronic music. Even accounting for the many labors that brought them to be, these materials seem produced by an organic logic. Their complex friction forms a habit of thought, scores a network of grooves on the floor of the mind”.

This is music with dimensionality. Sonic objects are deployed, developed, and dissected in various states of mutation. The listener flits about between the field and the lab. The tone is warm in a way only the sun could make, the pace as forceful and as variable as a gale. Whether one locates Rock Island in a sea or in a refinished attic (as in Greg Burak’s album cover), whether one escapes to there or is banished, its psychic environs are charted clearly enough. Only at this remove from the mainland can we sense the conditions necessary for such a strange species of sound.