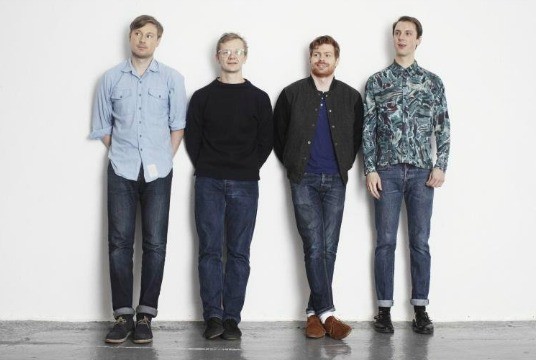 Northern Transmissions catches up with Jimmy Dixon From Django Django.

NT: Your latest album ‘Django Django’ has received numerous accolades, including a five star review from an influential British newspaper and a nomination for The Mercury Award. Are you surprised how many people have become attached to the record?

JD: Yeh, we never really had anything in mind other than getting the record finished and released, so its been a massive surprise for us all. A really great one none the less.

NT: I really wanted to ask about the track ‘Loves Dart’, what is the true inspiration behind this song?

JD: It’s about a guy who goes I’m search of riches during the American gold rush but whilst in the desert longs for the girl who he left behind. I think we’re all massive film fans so telling stories within songs is something we’re all drawn to. It’s quite a dusty sounding song, we were probably listening to Ennio Moriconne at the time.

NT: The band has really formed it’s own unique sound. Many bands today borrow quite a bit from other sources. Is it a conscientious effort to try and keep things original?

JD: I think we just wanted to experiment with all the things that we had around us. We didn’t have any ideas in terms of the kind of record we were making we just took each track one at a time.

NT: You guys played a show with Metronomy wearing medieval smocks with tassels, can fans on this North American tour expect some interesting wardrobe choices as well?

JD: Ha, yeh hopefully we’ll have a whole new outfit to bring along with us. No plans of what exactly yet but you never know the smocks might make a comeback.

NT: What do you think about the music being created today? Is it an interesting time?

JD: I think there is always music that is forward thinking being made. It might not be in the charts but if you route around in record shops you will always find it. There’s a record label in London called night slugs who are putting out some of the most exciting music I’ve heard for a while.

NT: I think the band all met in Edinburgh at art school, how has moving to England changed things for you guys? Is it easier or more inspiring living where you are?

JD: Well we really only formed  in London so being here actually made us get up and start writing music. I’m not sure it would have happened in Scotland, there are too many distractions. Ie nice pubs.

NT: Tell me a bit about working with Ribbon Music in North America, were you attracted to them because of their eclectic lineup of bands?

JD: We were keen to put the record out with people who were really into what we are doing. Everyone at ribbon love their jobs too so it was an easy decision for us. They’ve done great with UK acts they’ve signed so we were excited when they showed interest.

NT: Can you tell me five favourites from your record collection?

JD: Tough, I’ll give you my five top albums for this week…