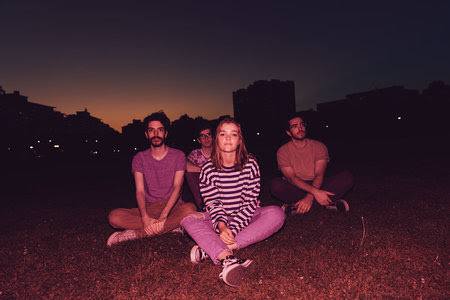 This week Dizzy premiered their new single “Pretty Thing”. The song was produced by Damian Taylor (Björk, Arcade Fire, Austra) and singer Katie Munshaw explains: “I wrote ‘Pretty Thing’ shortly after graduating high school. I think high school is traditionally remembered as a bad experience, and when I say mine wasn’t, it’s usually met with an eye roll. ‘Pretty Thing’ was me saying, ‘No, this time of my life was beautifully heartbreaking, loving, and the friends I made have made me better. This is how I will remember them. This was a good thing.’” “Pretty Thing” is now available via Royal Mountain Records HERE. Dizzy played SXSW last week and are currently supporting Milk & Bone on a North American tour, including a stop on Sunday at Portland’s Doug Fir Lounge. See below for a full itinerary.

Like most small-town millennials, Dizzy went to high school basement parties, discovered the dangerous distractions of social media, scraped their knees, fell in love, and felt insecure. Unlike most of their peers, though, Dizzy ditched the routine high school to college to 9 to 5 trajectory to create story-songs out of their coming of age in suburbia. “Oshawa is dense. We all grew up in modern suburbia so there’s an arm’s length between my neighbour’s house and mine.” Said Munshaw. “Making music always stemmed from my being overly sensitive about everything, so when you’re that close to so many people you’re bound to meet the essential characters that screw you up enough to start writing about them. Oshawa introduced me to friendship and heartache and change while keeping me bored enough to sit at home and write about it.”