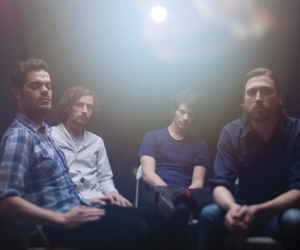 Five years into their existence as a band Disappears have finally exhaled – following a steady run of singles, EPs and three full lengths, the band retreated to their studio at the end of 2012 to take stock of where they had been and where they wanted to go.

Disappears returned fully stretched out into the void with 2013’s KONE EP. Abstract and experimental, it erased any expectation’s people had about what Disappears sounded like or were capable of, as well as introduced new drummer Noah Leger – a pivotal force in what was to follow.

Era, Disappears fourth album in as many years, was birthed during the bleakness of the Chicago winter 2013 at Electrical Audio by now regular foil John Congleton. Insular and dark, Era sees the band refining their love of dub, minimalism and repetition into their most original and stark set yet. Decision and consequence weigh heavy on the album – both lyrically and through the bands decision to let the studio direct the final forms of the songs.

The band today released first single “Power” on their site, and have also announced a full co-headlining tour this fall with San Francisco-based shoegaze band Weekend. Era is Disappears at their most abrasive, contemplative and paranoid – it’s the sound of the void looking back, and it arrives August 27th on Kranky Records.