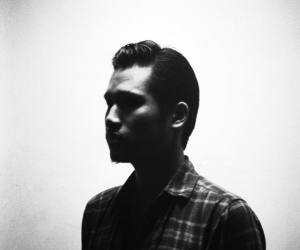 Dirty Beaches has today announced a full North American tour this fall in celebration of his acclaimed new double album, Drifters/Love Is The Devil, out now on ZOO MUSIC. These dates accompany his already announced two dates taking place this month in New York, with a solo set at Mercury Lounge and a special, one-night-only collaboration with Heathered Pearls and Eola, with all dates below. He’ll also be releasing a special, limited edition tape only version of the double record while on tour.

The solo project of Alex Huang Hungtai, Dirty Beaches has perhaps surprised his already familiar audience of fans with Drifters/Love Is The Devil, a double record that toes the line between his carefully refined rockabilly sound and one that leads more towards instrumental film scores, characterized by intensely beautiful and often melancholy emotion. The artist went on NPR recently to discuss the new double record and some of its influences and history, called “washy, dreamy rock music that often feels nostalgic.”

Dirty Beaches, started off as a one man band in 2005 in Montreal. A trans-pacific nomad and genre hopping sound smith, his past releases include drone instrumentals, film scores and a fascination with dissecting popular american music like blues, rockabilly, soul, RNB, and hip hop, often rendering them to the point where its no longer recognizable.

His latest release, Drifters/Love Is The Devil, is a double LP that chronicles the musician’s life on the road over the past 2 years, as we follow him down the rabbit hole through the labyrinths of Berlin, Belgrade, Paris, and many other cities through heartbreak, rebirth and masochistic existential self reflection.

Recorded between Montreal and Berlin in the winter of 2012, the double LP is separated only by aesthetics, as they are tightly woven together thematically as one conceptual piece. If 2011’s Badlands was an exercise in exorcising past ghosts in a semi-fictional world, then Drifters/Love Is The Devil is a reflection on the fragility of reality. One, of the surface world in which he explores the night life of bright neon temptations dwelling in hedonistic irresponsible values, and the other of the inner world, one of remorse and lovelorn tragedies.