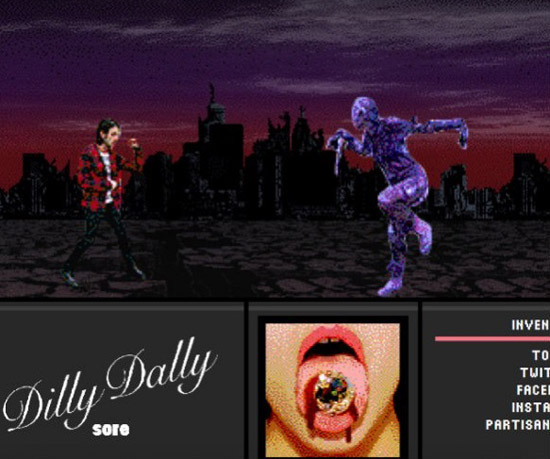 Dilly Dally are not a band who pulls their punches and neither do their avatars. The band’s debut album, Sore, is available to stream now, here on Spotify while playing a rock-em-sock-em NES-style video game on their website, dillydallyband.com. The backstory explains how the four characters – members of Dilly Dally with code names, like guitarist Liz Ball as “Blizzard,” and lead vocalist and guitarist Katie Monks as “Katie Hunks” – have survived the apocalypse and taken a time machine into the future. The game explains, “Our hometown, Toronto, slathered in blood and flames and pizza crusts and ice cream cones, had one surviving purple mutant who was ruling the world – and being a dick in general. Dilly Dally got tired of looking at him. So we whipped out our legendary Power Moves.”

Use the band’s avatars to punch out the “Gross Purple Dude” – Katie’s choice of villain name. Winning entails “the glorious (albeit temporary) quenching of your insatiable blood lust” while listening to the record a week early.

“Sore is an album about rebirth,” she says, “hence its disgusting guitar tones and constant moaning. What can I say, happiness is a struggle, but the last thing I’d ever want you or anyone else to do is give up that fight.”

The forthcoming Sore is a dynamic album that rarely lets up; it is both heavy and melodic, with pop sensibilities that shine through the noise.  Their debut is strong, due in part to production from Josh Korody (Fucked Up, Greys) and Leon Taheny (Owen Pallett, Austra, Dusted). On it, Monks and crew manage to allude to Sonic Youth, Yeah Yeah Yeahs, The Distillers, and The Pogues. Monks calls Sore“All that and a bag of weed.”

With a growing fan base outside of Toronto, Dilly Dally are ready to embark on their first headline tour this fall. The band will play CMJ Music Marathon in New York before hitting the road to play both east coast and west coast dates. A full list is below.