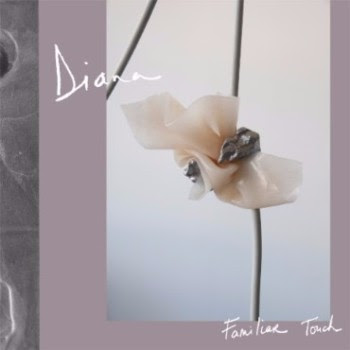 DIANA, have announced Familiar Touch, their follow up to their 2013 debut Perpetual Surrender, with the premiere of a single entitled “Confession”. The track is of the album which will be released on November 18th.

The new single hints at the direction DIANA have taken on the new record, blending the atmospheric synth pop of Perpetual Surrender with sides of dance music, abetted by a a style of production that foregrounds the strength of vocalist Carmen Elle’s performance and the depth and subtlety of the track’s ever-shifting arrangement. According to DIANA’s Kieran Adams “Confession” presents a distillation of some of the band’s recent influences and addresses the ending of a dysfunctional relationship.

“‘Confession’ is a good blend of what we’ve been into recently,” Adams recently told FADER. “The drums off the top are from the emu E4x sampler and sound almost Depeche Mode-esque, and then there’s the Linn Drum, really funky synth bass and a whole other layer of ambience on top. The rhythm track is inspired by Jimmy Jam & Terry Lewis, maybe something like what it would sound like if they worked with Annie Lennox, and then there’s a guitar part that comes in in the second verse that has a really distinct tone, which is the result of the fact that Carmen played it with a toonie (a Canadian $2 coin for those who don’t know).

“Lyrically the song is a snapshot of the aftermath of a relationship that’s been formed around one person building themselves up by bringing the other down. It’s probably one of our bleaker songs to be honest. There’s no resolution, just four and half minutes of somebody rubbing it in over thick drums and that Jimmy Jam & Terry Lewis bass line. There might be a backstory that I could tell to shed some light on where the coldness comes from but I think I’d like that to remain a mystery, at least for this song…”

DIANA’s members had been involved with other projects (Elle touring as a member of Austra, and Joseph Shabason playing saxophone for Destroyer), Perpetual Surrender was the effort of a band that barely existed, DIANA having essentially come into being as the album was being written and recorded. The album was initially conceived as a one-off recording project, a constructive way to use studio time that Adams and Shabason had on their hands, and the excitement that greeted “Born Again,” the first track released from the album, was completely unexpected, propelling them to a place they had never planned on going.

“That the first single got the attention that it got was really sudden and surprising to us” says Elle. “At that point we’d never played a show or jammed or anything. We made a record in a really staggered way, where I only joined the band at the very end, and then we were suddenly getting emails from record labels who wanted to sign us. We put a song on the internet and people went fucking nuts, but that wasn’t supposed to happen at all.”

For Adams the experience was equal parts exciting and enervating, as he and his bandmates attempted to harness the momentum that had been generated by music they had no idea how to play live. “It was a big shock, and then we were purely responding to that for a while,” he says. “We didn’t have an oppurtunity to figure out what was natural to do. Everything felt very stressful because it wasn’t coordinated at all and we were just trying to catch up and figure out how to move forward.”

“We tried to fake it wherever we could,” says Adams. “That’s how we ended up doing things like having Carmen spend five days a week for three months in a walk in closet tracking vocals in the sweltering summer heat. I don’t think anyone is going to get the oppurtunity to make a record like Spirit of Eden by Talk Talk again. No one is going to make a pop album by having dozens of studio musicians hanging around. Having resources like those to record music that is left of center just doesn’t happen any more, so we improvised.”

“It’s like the ship of Theseus,” says Adams, “where piece by piece the whole ship is replaced and at the end the question is: is it the same ship? Do the pieces that have been taken away somehow leave a mark? Those frameworks impart a tone so perhaps the resonance of that tone is still there even after the pieces are gone. That’s very much what it was like working on this record. We had to find these songs.”