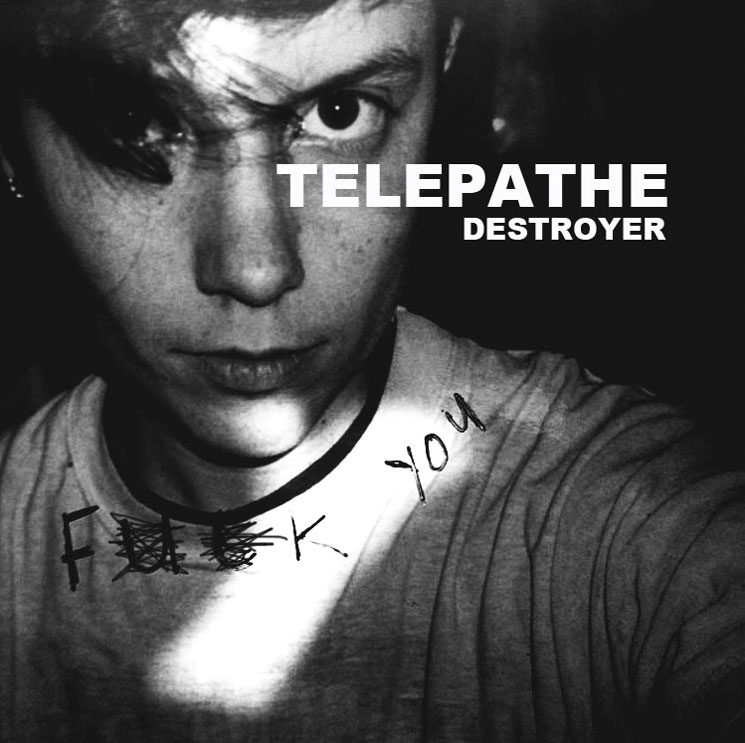 Cloaked in secrecy and veiled in mystery, at least to prying eyes online, Brooklyn-located, electronic-pop act Telepathe’s long-awaited sophomore album is finally set to drop on August 7th on BZML. In 2004 Busy Gangnes and Melissa Livaudais formed Telepathe after connecting over their mutual interest in hip-hop and dub-step music. The multi-instrumentalists departed the rock band they were playing in to focus their energy and abilities on their own songs, releasing the Farewell Forest EP in 2004 and setting up shop in Brooklyn. They built their own home studio and rehearsal space and created and delivered debut album Dance Mother via Federal Prism Records to great critical acclaim in 2009.

The next couple of years were devoted to supporting other outfits on the road, doing their own world tour, and producing remixes for other artists. Busy and Melissa regrouped in Busy’s hometown of Los Angeles in 2010 with the intent of recording their follow-up album. They spent that winter residing in an apartment on Sunset Boulevard and the following summer they migrated to Echo Park, crafting and finalizing what would become Destroyer with a target release date of 2012. The release of Destroyer, however, did not go according to plan and got held up by various industry and label issues.

Over two years after the album’s completion, Destroyer is at last being made available through the duo’s own record label, BZML. It was co-produced with Lewis Pesacov and mixed by Matty Green. Not much else has leaked online about the album, besides the 4 singles that have been released in recent years (“Drown Around Me”, “Slow Learner”, a live version of “Destroyer”, and latest song “Night’s Spell” out this past June). Busy and Melissa have kept a low profile with minimal, and sometimes old, information posted to their Facebook, Twitter, and MySpace pages. Maybe they’ve scrapped Telepathe’s past in order to arise from the ashes anew with Destroyer or perhaps they just can’t be bothered to update their social media sites and are letting their music speak for itself…

Whatever the case may be, the album comes late to the dark electro-pop party and isn’t very inventive lyrics-wise or otherwise. It trips into the same traps that most dance/electro/synth-pop music falls into – super-repetitive beats, synth runs, and/or vocals/lyrics, too-familiar instrumentation, constrained verse and chorus structures, and a lack of emotional depth. The anarcho-punk attitude that exudes from the album cover’s artwork and song titles like “Destroyer”, “Damaged Raid”, and “Fuck You Up” are also not transmitted via the duo’s sound and vocals. The tagline from Telepathe’s GooglePlus profile states “wrecking everything in music on purpose”, but that’s the last thing Busy and Melissa do on Destroyer.

Instead, they marry the glossy, brooding, but retro synth-pop of the 1980s with more complex, fuzzed-up electronic percussion and crisp, rhythmic beats and overlay those sonics with acceptable, but not exceptional, mild vocals that are pushed to the fore in the mix. While not exactly bold in approach or innovative in composition, the songs do display an engaging charm when given an individual spin and not listened to in succession where they begin to sound too similar to each other.

The first two singles are straight-up 80s-flavored, swelling synth-pop numbers. On the gently shimmering “Drown Around Me” Busy (or is it Melissa?) sing-talks the short-phrase lyrics clearly, benignly intoning “I was killing a moment of time.” amid a clacking beat, hushed extended synth lines, and a smattering of starfall electro-notes that recall Madonna’s “Lucky Star”. Heightened synth notes and dynamic beats keep “Slow Learner” busy and lively. Again, the vocals are clear and direct, but also doubled, sweet, and a bit repetitive on the Yoda-speak chorus line of “Shy I am around you.”

The album version of “Destroyer” is more pristine and slightly more discernible lyrics-wise than the official ‘live performance’ video version that’s been out for nearly three years. The austere atmosphere reaches a peak early on with drawn-out, The Cure-like synth progressions while Busy/Melissa recite in an oddly bland manner “Don’t mirror my time / I’d rather transform it.” (At least that seems to be what is said… Somehow the words are swallowed instead enunciated.) A reverberating clacking beat, skittering percussion, and surge of synths wash over the chorus as the word “destroyer” is proclaimed over and over again.

Latest single “Night’s Spell” dwells in a nocturnal ambience of prolonged, low and high-pitched synth lines and restless electronic percussion and rhythmic beats. Busy/Melissa’s vocals are shadowed by a deeper, manipulated male voice and take a plaintive turn on certain lyrics like “Who said we were timeless?” The most experimental track on the album is “Hyper Ho” which alternates between a more electro-ambient style of brightly echoed synth notes, chiming tings, and laid-back pace and a drum and bass-based race of fast-fluttering vocal blips and super-speedy clacking rhythms.

The relationship miscommunication-themed “Throw Away This” runs on a gritty motorik tempo which is contrasted by Busy and Melissa’s light, glitchy vocal tones. One of them sing-talks in a mid-range timbre while the other floats loftily above. High register synth notes captivatingly twin this airy vocal delivery. The repetitive lyrics, however, leave much to be desired as Busy and Melissa continually cry on the chorus “Waiting for your sign.” The same issue slightly mars the mostly mesmerizing “Someone Is Home”. A propulsive, clacking tempo and percolating percussion push up against ear-piercing synth notes that reflect the brief, lyrically vivid, mid-range vocal phrases on the verses. Busy and Melissa slide into higher pitched exclamations on the chorus which expose the undistinguished nature of their voices.

The fuzzed-up, peppering electronics tumult, upbeat, shaken percussion, stark and mysterious lyrics, and compelling vocals of “Onyx” lift it up from everyday electronic-pop. Busy and Melissa trade vocal lines, lilting through the words “…castrating the night…” and “Celebrate the night storm…” on the verses and sounding like Hands-era Little Boots on the chorus sections. Last track “Fuck You Up” is not the vicious explosion it should be, but has Busy and Melissa treading through middling vocals on the verses and reiterating ad nauseum on the chorus that “I want to burn it down / I want fuck you up.” There’s no teeth to Busy and Melissa’s threat; it’s just another electronic dance-pop tune with a ubiquitous clacking beat, little perky pushes of synth notes, and a repetitive lyrical motif. The smooth and cool vocal coos at the end of the track do momentarily soothe the ear, but it’s not enough to alleviate the recurrent sonic and vocal refrains, similar and familiar instrumentation, and prosaic vocals and lyrics that mark most of the songs on Destroyer.