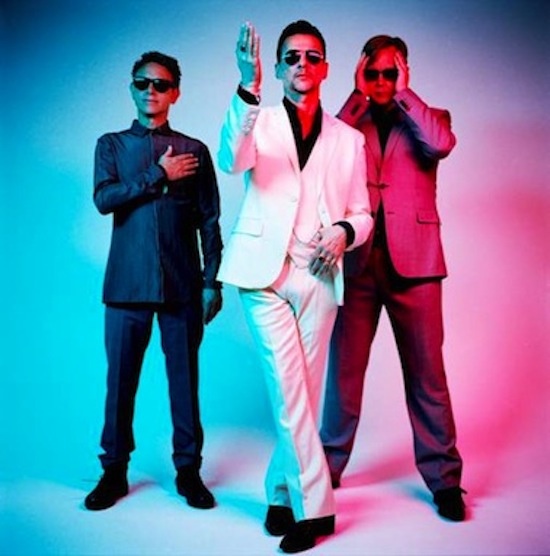 “I am very happy with how the album turned out,” comments DM’s Martin Gore. “The music has a similar vibe to Violator and Songs of Faith and Devotion and I think the songs on the album are among some of the very best we’ve done.” The band has announced that the new album will contain brand new tracks written by Gore and Dave Gahan. Gahan reveals, “The album has a very organic and direct feel to it. It’s not a blues record, but it definitely has a soulful vibe. During the recording process we really tried to get the elements of performing and the live show into the album more.” The band gave fans a glimpse into the making of the new album in October when they released the following video clip featuring new music. Additional album details will be disclosed in the coming weeks.

Pioneers of the post-punk era, Depeche Mode have gone on to become one of modern music’s most
influential groups with global sales in excess of 100 million. Formed in 1981, Depeche Mode – Martin
Gore, Dave Gahan and Andy ‘Fletch’ Fletcher – continue to win critical and commercial acclaim
around the world both in the studio and on the road. The band’s 12 released studio albums have
reached the Top Ten in over 20 countries, including the US and UK. Their last album, 2009’s Sounds
of The Universe, debuted at the #1 chart spot in 14 countries around the world.

The band will perform 34 shows in 25 European countries, featuring appearances at the Rock Werchter
Festival in Belgium, BBK Festival in Spain and Optimus Alive Festival in Portugal. Later they will
go on to play at Rome’s renowned Olympic Stadium, the Stade De France in Paris, and Moscow’s
Locomotive Stadium before wrapping up the European leg of their tour in Minsk, Belarus on July 29.
A full North American tour will follow, with details to be announced shortly.