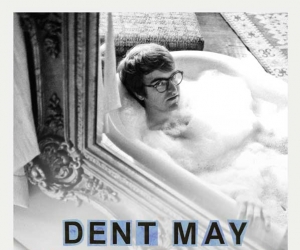 Are you ready for fall yet? If not, Dent May is already one season ahead of you with a new soundtrack for a season that is yet to arrive. “Summer is over, I can’t believe it’s gone, the air is colder now but my bed is warm,” May sings on the last track of the newest Dent May album.

But considering summer is still upon us — granted, only a few weeks remain — the album plays like a melancholic reflection on good times past before they’re even gone. It’s preemptive seasonal nostalgia, similar to that nostalgia you feel even before a loved one has left.

And if there’s anything to miss before it’s gone, then it must be the carefree attitude that the warm weather brings us. This is what Dent May captures throughout 11 songs on “Warm Blanket.” Of course, not every track mourns the fading of summer, but rather they capture certain emotions and attitudes that are heightened almost supernaturally by the summer months. And by certain emotions I mean primarily a desperate longing for some good old fashioned love.

Long lost lovers, the pursuit of true love, and meeting new people — May captures a somewhat-depressed attitude but easily disguises it with enchanting, feel-good instrumentalism. But what stands out the most from the album itself is May’s voice. It rings like a modern Morrissey but with a more drawn out whine.

While the songs themselves are beautifully written in their own right, as a collection they sound overtly similar to the point where you are drowning in May’s own dreams of hopeless love. And while some listeners may praise this uniformity in general aesthetic, the album begins to feel redundant. Sure, you can listen to the album from start to finish and enjoy it, but on second listen, you begin to pick out the most dynamic tunes and stick to them, like the aforementioned final track, “Summer Is Over.”

This isn’t to say that the album doesn’t strike a chord with the listener, because it most certainly can. May’s lyrics, while redundant at times in terms of aesthetic and story, are beautifully crafted and poetic. “Warm Blanket” is an easy listen, one that shouldn’t be skipped over but also one that certainly captures the nostalgia of summer passing.