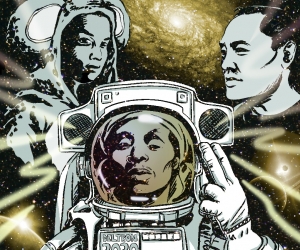 Deltron 3030 is excited to announce a fall tour in support of their upcoming album Deltron 3030: Event II, out October 1st via Bulk Recordings. The tour will feature a sixteen-piece orchestra — dubbed the 3030 Orchestra — on select dates, noted below, in addition to the three-piece touring band. Following performances at both the Los Angeles and San Francisco Rock The Bells, the tour will begin on October 8th in Boston at Paradise and end on October 25th at Mountain Oasis Festival in Asheville, with more dates to be announced soon. Full tour dates are below.

Deltron 3030: Event II, due October 1st, 2013, is Deltron 3030’s long-awaited successor to their self-titled cult-classic debut. Deltron 3030 — composed of a trinity of alt-rap all-stars: rapper Del The Funky Homosapien, producer Dan “The Automator” Nakamura and DJ Kid Koala — are celebrating the announcement with the debut of the album trailer, set to the first track on the record “Stardate.” The clip, which features Joseph Gordon-Levitt.

Individually, the collaborators of Deltron 3030 stand at the top of their respective musical disciplines; together as Deltron 3030, they warped space, bent time, transcended genre and blew minds with Deltron 3030, an album that still stands today as one of the most important records in the annals of underground hip-hop.

Del The Funky Homosapien, founder of Oakland’s seminal Hieroglyphics crew, launched his career as part of his cousin Ice Cube’s posse, da Lench Mob, and gained recognition as a top-tier hiphop verbalist with his 1991 debut, I Wish My Brother George Was Here, featuring the memorable tracks “Mistadobalina” and “Dr. Bombay.” He would release three more albums -1993’s No Need for Alarm, 1998’s Future Development and 2000’s Both Sides of the Brain – before joining with Nakamura and Koala for Deltron 3030.

13. What Is This Loneliness (ft. Damon Albarn and Casual)

1. City Rising From the Ashes (background vocals by Mike Patton)