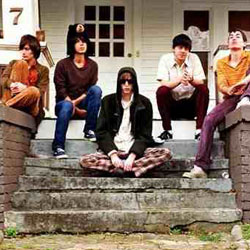 Starting this month, Deerhunter is heading back out on the road for a brand new North American tour. Dates include newly announced shows in Las Vegas and Athens, GA, as well as festival appearances at FYF Fest in Los Angeles and Fun Fun Fun Fest in Austin. Full tour dates above. The band’s run of North American tour dates follows Deerhunter’s recent curation of ATP UK in Camber Sands, which found the band performing Cryptograms, Microcastle, and Halcyon Digest in their entirety over three days. Deerhunter also recently played an unprecedented three sets at Primavera Sound in Barcelona.

Earlier this year, the band released their fifth studio album, Monomaina on 4AD. Recorded entirely on an 8 track, the record was dubbed by the band as their “avant-garde” “nocturnal garage” record and was hailed by critics as one of the band’s finest records.