“No band is an island. Felt like one sometimes, in those budgetless and obscure early days, Satomi and me locked in the basement trying to figure out how our clashing personalities and ideas could turn into a band. If we hadn’t had that crazed mid-90s Bay Area punk scene to call home, I doubt we’d still be here to chat about a 20th anniversary.” – Greg Saunier

In many ways Deerhoof hasn’t changed. Their new record La Isla Bonita was recorded in guitarist Ed Rodriguez’s basement. Situated next to a parking garage, it was perfect for making noise till the wee hours. They recorded live, DIY style, “a weeklong sleepover arguing over whether to try and sound like Joan Jett or Janet Jackson, cracking each other up, one guitarist whose name starts with J always putting too much red chile into the rations,” says Greg. But more than that La Isla Bonita is about the eclectic worldwide community that has supported them.

To co-produce the record they tapped former journalist-turned-label owner and producer Nick Sylvester, one of first writers to have an eloquent take on Deerhoof’s harsh and erratic sound. You’ll hear them pay musical tributes to their improbable list of heroes-turned-fans:David Bowie, Ric Ocasek, The Roots, Lou Reed, David Byrne, Sonic Youth, The Flaming Lips, Radiohead, Beck. Of course their intent is never reverence, but provocation. They are always on the hunt for that perfect union of the hilarious and the terrifying that one hears in other bands of their generation like Bikini Kill and Lightning Bolt. 2014 has been a killer year for young, aggressive female-fronted bands (St. Vincent, Tune-Yards, Perfect Pussy, Karen O, Speedy Ortiz) and La Isla Bonita is also partly a discourse with them.

Every song is an exercise in duality, alternating between minimalism and bombast, melody and dissonance, and dynamism and tranquility. This all builds to a greater dual theme throughout the album between gloom and joy invoking the feeling of standing at the edge of the precipice and dancing your way off. “We don’t set out to create masterpieces. The Deerhoof fan is a thrill-seeker. This is the latest volley in an ongoing conversation we’ve been honored to hold for 20 years,” says Greg. 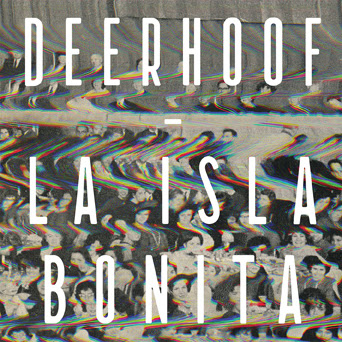