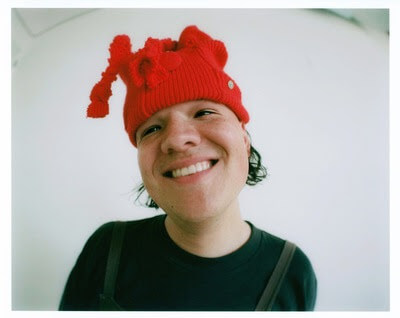 Deaton Chris Anthony debuts “Behind The Lockers With Hunter".
Share on TwitterShare on PinterestShare on PocketShare on RedditShare on FacebookShare on Email

Musician/visual artist Deaton Chris Anthony has shared “Behind The Lockers With Hunter.” The track, is taken from Deaton’s forthcoming debut album, SID THE KID, out July 29 on Dirty Hit. “This moment of the album is all about live dichotomy,” says Deaton. “A whole room yelling about not fitting in is as angsty as it gets.”

Deaton recently shared a handful of tracks from the album—“Good Buy My Old Life,” a collaboration with the New Zealand star BENEE and “iScream” featuring Dirty Hit labelmate beabadoobee, “Shed Head,” and a three-track short film, “REAL EYES REALIZE REAL LIES,” directed by creative collaborator Julian Klincewicz. SID THE KID is the story of the titular character, a lightly fictionalized version of young Deaton, and his older brother Korbin growing up in Kansas (where the real-life Deaton also grew up).

“I draw inspiration from childhood. I have an older brother, Korbin. This record is dedicated to him,” says Deaton. “We would drive in the country in Kansas with the sunroof open. We’d listen to Dashboard Confessional, a lot of emo stuff, and he would scream the lyrics, looking up at the stars. That’s where SID THE KID takes place: rural Kansas. Imagine this: I was a chubby ten-year-old, and my nickname was Sid the Kid. Korbin and I lived in this little shed in the middle of this forest. This shed had our computer, T.V. and all of our music gear. We’d walk to school nearby, and we hung out at the skate park and the bowling alley.”

SID THE KID takes Deaton in a bold new direction as the synth whiz’s first-ever guitar-based music, working with a list of acclaimed artists including Filipino-British songstress Beabadoobee, rising New Zealand star BENEE and multi-instrumentalist Mac Demarco, who plays bass and drums on the album track “Friends Don’t Hurt Each Other.” Deaton collaborated on creative direction for the album with multi-disciplinary artist Julian Klincewicz (Beyonce, Jay-Z, Louis Vuitton, Acne, Calvin Klein).
The visual language for the record is a spectrum of color, texture and emotion that skirts the line between modern nostalgia and contemporary visual vernacular. Each video takes on and pays homage to different textures of the early 2000s childhood—VHS memories, Sunday morning cartoons, skate videos on DVD, old family Super 8 films and reality T.V..

The Los-Angeles based musician is also a visual artist, fashion designer and painter. He has produced for Charli XCX (“New Shapes” with Caroline Polachek and Christine & The Queens) and Clairo, has been commissioned to make looks for Billie Eilish and has collaborated with VANS, Evan Mock and a host of others across mediums.