Death From Above are stronger now than they’ve been in years, so strong in fact that they’ve even shed the 1979 from their name in recent months. Coming back this year with the pop-tinged Outrage Is Now, they’ve managed to evolve as a band without losing what makes them stand out. We caught up with bassist Jesse F. Keeler to talk about their newfound strength as a band, their enduring logo and even Super Mario.

Northern Transmissions: Your latest album felt very much like a pop-infused take on your earlier sound but you seem to be moving noticeably into pop on this record, what inspired this shift and move to an even wider sonic pallet?

Jesse F. Keeler: It has more to do with the recording than anything else. The way it was made and the recording itself, it was made by Eric Valentine who’s made some massive pop records, and it just comes through. It’s what we wanted and we wanted to see how good our band could sound. In terms of the music itself, it’s not that different. I’m always trying to go a little further and play things I haven’t played before. My number one inspiration is not to repeat myself. It’s boring to make the same stuff over and over again. In terms of keeping our own attention, we want to be challenging ourselves in some way. There’s things that I write that I need to learn how to play. There’s some things on this album that required me to find new ways of even getting around the bass. On “Trainwreck 1979” we had that piano section on it, and we wouldn’t have done it years ago because we didn’t know how to do it on stage. This time around we’ve figured out how to do it, so it enables a song like “Freeze Me” to exist. You can see things that we learn on one record and apply on the next.

It’s also been interesting to see how well your elephant logo has endured to become like the Misfits skull or even Eddie with Iron Maiden, was this image something you planned to endure or was it a happy accident?

That was the exact idea. I was aiming towards the idea, and I had proposed the concept to bands I’d been in before. The idea was to have poster with just a logo on it and no writing besides where the show was and how much it cost. We did that back in 2004 and it worked, people showed up. I used to do graphic design for a living, and I was fascinated by exit signs and bathroom signs where it’s just a picture but everyone knows what it means. I was inspired by that and thought it was a great feat. Time has proven that I have indeed done that and it’s pretty pleasing. KISS’s name is also their logo, The Rolling Stones’ lips, tons of bands have them.

Did you realize when you wrote the hook to “Never Swim Alone” that it was the Super Mario “Underground Theme” and did you worry you might get in trouble when you spotted it?

I didn’t at the time, but afterwards I certainly did. It’s not surprising, I grew up with that game. I bought that NES with that game, it was one of the first things I bought with money from a job, that tells you how old I am. I sold my ColecoVision for $30 the week it came out to buy the game. That game’s in there somewhere. I haven’t done a back-to-back to see if they’re in the same key but they have the same feel for sure. I don’t think anybody cares though about the similarities. I could probably find a similar sound from before that too. There’s only so many notes, and 32 steps in a bar, so at a certain point you’re going to do things similarly by accident.

Do you find yourselves pulling in different tricks and sounds from your projects like MSTRKRFT or do you try to keep these all as different outlets?

You learn stuff and it often becomes part of how you think. Obviously there’s things that we learn along the way that come out with this band. I can’t think of anything specifically but if it’s time to program a synth, everyone turns and looks at me. Other times, I would start chopping away and realize it was already great.

I understand part of your recent switch back to just calling yourselves Death From Above involved the ice cube art for “Freeze Me”, has the change had any weird side effects? Death From Above Drop Video For ‘Caught Up’ 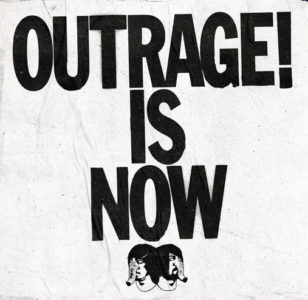