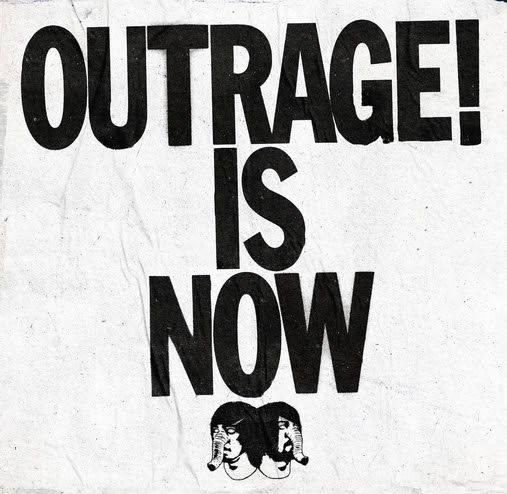 Death From Above have announced that Outrage! Is Now will be released September 8, 2017 via Warner Bros. Records/Last Gang Records. Listen and share the new album track “Never Swim Alone” here and watch the lo-fi video directed by singer/drummer Sebastien Grainger here. An extensive North American tour has also been announced, kicking off September 15 at Riot Fest Chicago.

Sebastien Grainger (vocals, drums) and Jesse F. Keeler (bass, keys, synths) – made a collective decision to embrace their own penchant for perpetual motion while gleefully maintaining the car-wreck intensity of their punkified disco rock. Ultimately, Outrage! Is Now confidently kicks off a new chapter for Death From Above.

“We are committed to evolution. This record is the sound of the two us pushing at the walls. We want there to be space, surprises and action!,” says Sebastien. “We both wanted to see how far we could take our sound as Death From Above. In a way, that has always been our objective,” adds Jesse.

The two began pondering what became Outrage! Is Now while in the midst of finishing their 2014 record, The Physical World. Marking a return after a near 10-year studio hiatus. As they retreated to Jesse’s farm two hours east of Toronto to write in 2016, the musicians re-examined the way they’ve written in the past. They found new ways to start ideas, and tried to exorcise their old demons. With a host of demos, Death From Above headed back to Los Angeles to work with producer and engineer Eric Valentine (Queens of the Stone Age, etc.). Making for what Jesse describes as the “fastest recording process,” the vision quickly took shape.

“The myth of what we should be didn’t exist anymore,” Sebastien agrees. “There was never a moment where we took a conventional path-either writing or recording. Eric has been making records for decades and we managed to make him say: ‘Well, that’s a first’ during every song! There was always some strange element thrown in. In a way it’s a very serious record, but dressed in a really fun outfit.”

“There’s an absolute chaos and confusion in the world, and people who would otherwise agree on most things seem to be disagreeing on everything,” sighs Sebastien. “There’s a lot more space between the poles of opinion and views on the world. It seems like there’s a barrier of disgust as we dehumanize one another based on a few slight differences of opinion. The title is an observation of this hyper-sensitivity, which we’re all a part of.”

“I hope fans hear the progression,” Jesse leaves off. “This record is very much the result of the environment and experiences of the last five years. If we didn’t have struggle, life would be really fucking boring. These songs are an anti-boredom manifesto.”

“Outrage! Is Now is meant to be felt on both a visceral and emotional level,” concludes Sebastien. “We tried to make something that excites and surprises. Our journey is that of enlightenment and seeking truth. There’s enough fiction and meaningless distractions in the world to make you totally shut off. We hope this record turns you on.”

Death From Above
Outrage! Is Now
Tracklist: