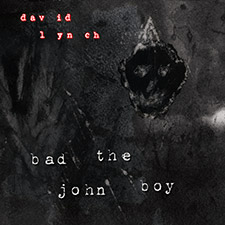 On the heels of David Lynch’s sophomore full length, The Big Dream, comes the very limited edition 12″ single for “Bad the John Boy.” Lynch and his producer Dean Hurley conceived this harrowing track while in the process of creating The Big Dream. Lynch’s vocal approach alongside the track’s throbbing pulse provides an unsettling & thrilling listen.

Complimenting Lynch’s left-of-center A-side, the B-side proudly features a Venetian Snares remix of The Big Dream’s title track. Despite the fact that Canadian electronic musician Aaron Funk has been known for reinventing breakcore, with this remix he breathes a completely new approach into the song, turning it into something far from your typical dance remix. Dean Hurley, Lynch’s producer describes this track as “music for the end crawl of a bootlegged sci-fi/horror film that you borrowed from your friend’s older brother and caused you to realize for the first time that you were actually scared in broad daylight.”