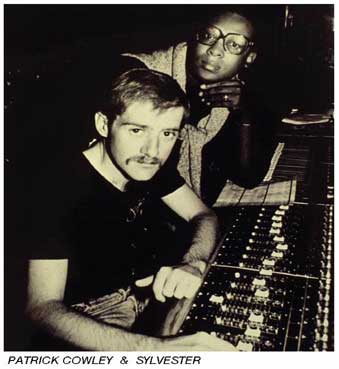 Dark Entries and Honey Soundsystem are excited to announce the release of School Daze, a retrospective double LP of disco pioneer Patrick Cowley.

Simply put, Cowley was a musical trailblazer ahead of his time. His approach to making music was an experiment of sound and with his since exploration he forged a new electronic sound and style, cementing his position as a key player in the creation of hi-NRG dance music and the San Francisco Sound.

His credits as a producer include Sylvester’s “Do You Wanna Funk”, Paul Parker’s “Right on Target” and collaborations with Jorge Socarras of Indoor Life – this is just the tip of the iceberg.

An early victim of AIDS, Cowley passed away at the age of 32; these recordings shine a new light on the experimental side of a disco legend who was taken too soon from us.

School Daze will be released on what would be his 63rd birthday, October 19th. All proceeds from the release will go to the San Francisco AIDS Foundation. Be sure to check out the Patrick Cowley website  to read more about this amazing man.

Perhaps one of the most revolutionary and influential people in the cannon of disco music, Cowley created his own brand of Hi-NRG dance music coined “The San Francisco Sound.” Born in Buffalo, NY on October 19, 1950, Patrick moved to San Francisco at the age of 21. He studied at the City College of San Francisco where he founded the Electronic Music Lab. During this time Patrick createe radio jingles and electronic pieces using the school’s equipment, first a Putney, then an E-MU System and finally a Serge synthesizer. He made experimental instrumental songs by blending various types of music and adapting them to the synthesizer.

By the mid-70’s, Patrick’s synthesizer skills landed him a job composing and producing songs for disco superstar Sylvester such as “You Make Me Feel (Mighty Real)”, “Dance Disco Heat” and “Stars.” This helped Patrick obtain more work as a remixer and producer. Of particular note was his 18-minute long remix of Donna Summer’s “I Feel Love” and production work with edgy New Wave band Indoor Life. By 1981 Patrick released a string of dance 12″ singles, like “Menergy” and “Megatron Man”, creating the soundtrack for a generation. Also that year, he founded Megatone Records and released his debut album. Around this time Patrick was hospitalized and diagnosed with a then-unknown illness: that would later be called AIDS. Prior to his passing on November 12, 1982, he recorded two more Hi-NRG hits, “Do You Wanna Funk” for Sylvester and “Right On Target” for Paul Parker.

In 1981 Patrick was contacted by John Coletti, the owner of famed gay porn company Fox Studio in Los Angeles. John had heard about Patrick’s music from the legendary Sylvester and proposed he write music for his films. Patrick jumped on this offer and sent reels of his college compositions from the 70s to John in LA. Coletti then used a variable speed oscillator to adjust the pitch and speed of Patrick’s songs in-sync with the film scene. “School Daze” is a collection of Cowley’s instrumental songs recorded between 1973 and 1981 found in the Fox Studio vaults. Influenced by Tomita, Wendy Carlos and Giorgio Moroder, Patrick forged an electronic sound from his collection of synthesizers, modified guitars and self-constructed equipment. The listener enters a world of dark forbidden vices, introspective and reflective of Patrick’s time spent in the bathhouses of San Francisco. The songs on “School Daze” range from sparse proto- techno to high octane funk to somber post-punk to musique concrete, revealing the depth of Cowley’s unique talent.

Featuring over 80 minutes of music, this compilation contains soundtrack music from two Fox Studio films, “Muscle Up” and “School Daze”, never before released on vinyl. The tapes were restored and transferred using the same speed and pitch settings, then remastered for vinyl by George Horn at Fantasy Studios in Berkeley, CA. The vinyl comes housed in a glossy dual pocket gatefold featuring classic gay porn imagery from the Fox Studio vaults plus an essay from Indoor Life vocalist, Jorge Soccarras. For Patrick’s 63rd birthday, Dark Entries and Honey Soundsystem present a glimpse into the instrumental world of a young genius. These recordings shine a new light on the experimental side of a disco legend who was taken too soon. All proceeds from “School Daze” will be donated to the San Francisco AIDS Foundation, who have been commit- ted to ending the pandemic and human suffering caused by HIV since 1982.