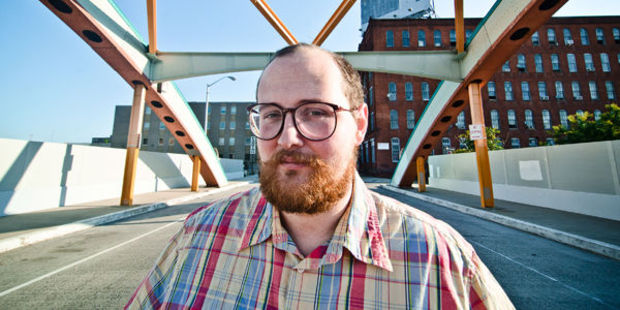 Baltimore-based musician Dan Deacon has shared a new music video for “Meme Generator,” the third video from his latest album Gliss Riffer, now out on Domino Records. It follows the release of the Adult Swim’s Off the Air produced video for”When I Was Done Dying.”

The video directed by Monica Mirabile, stems from an earlier collaboration between the two on a performance art piece with choreography group FLUCT that resulted in Deacon writing an earlier version of “Meme Generator” with lyrics. To complement the video, there’s an interactive video game based on the four different choreography sequences seen in the music video. Surprises abound for those that play the game.

Director Mirabile says in regards to the collaboration:

“Meme Generator is a game of programmed choreography. The players are downloaded into a digital world and asked to play the game of semiotic codes interacting with the “house”. A few years ago Dan and I decided to collaborate on a video that I was making with my own performance art collaboration (FLUCT). That video is set in a living room which looped suburban leisure choreography created by the glitch of being physically effected by technology. The inspiration for this video has been an extension of the way our bodies are programmed by the worlds we live. In the music video, four choreographers created four dances in a liminal house. I gave no rules, just asked for a response derived from the choreographers own relationship to the “program.” The program being the familiar space of the house. I’m most directly inspired by the choreography of the people that surround me, as we are all affected by a similar marketed reality. We all play the game.”