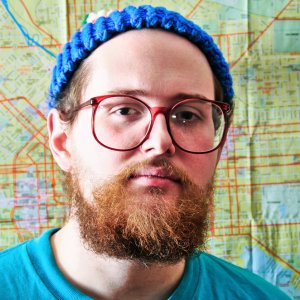 Dan Deacon is set to release a “Konono Ripoff No. 1″ limited 7″ (500 hand-numbered worldwide) for this year’s Record Store Day. The song has been a fan favorite of Dan Deacon’s recent live shows and the 7″ features two versions of the track as performed by two sets of dual drummers: Kevin O’Meara and Jeremy Hyman on Side A; Denny Bowen and Dave Jacober on Side B.

The cover photo for the 7″ was taken at Whiteside Mountain near Highlands, NC by Molton Brouff, the winner of the crowd sourced Dan Deacon America Instagram contest presented by Aperture. Find out more information and see the gallery of submissions here: http://dandeacon.com/america

Deacon, who has recently been nominated for a mtvU Woodie in the ‘Branching Out’ category, has unveiled yet another crowd sourced contest allowing fans to program a light show for the Dan Deacon App to be used on his upcoming tour supporting Animal Collective. Find out more information here: http://dandeacon.com/site/experiment/

In April, he’ll perform at some of the nation’s biggest museums including the Natural History Museum in Los Angeles, The Kimmel Center in Philadelphia and Mass MOCA with a special performance culminating at the Metropolitan Museum of Art in New York City on April 27. The Met show will feature special guests from So Percussion and the NYU Steel Drum band.

B) Konono Ripoff No. 1 (Version B) instrumental