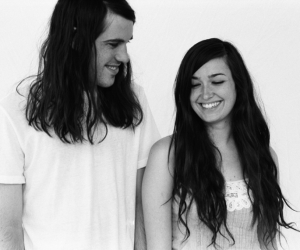 Today Cults have released a music video for their single “High Road” off of their forthcoming sophomore release Static, out October 15 on Columbia Records.  The video was directed by Hiro Murai (Earl Sweatshirt, St. Vincent, The Shins).

Cults’ is the genesis of Madeline Follin and Brian Oblivion, who mysteriously appeared in the spring of 2010 with their viral single “Go Outside.”  Acclaimed for what the New York Times describes as an “entrancing and intuitive strain of indie rock indebted to clean-cut ‘50’s rock with flashes of ’60’s haze,”

Static is comprised of 11 tracks including the previously released song “I Can Hardly Make You Mine.”  The band shared a self-directed album teaser which features additional tracks from Static including: “We’ve Got It” and “So Far,” view here: http://cultscultscults.com