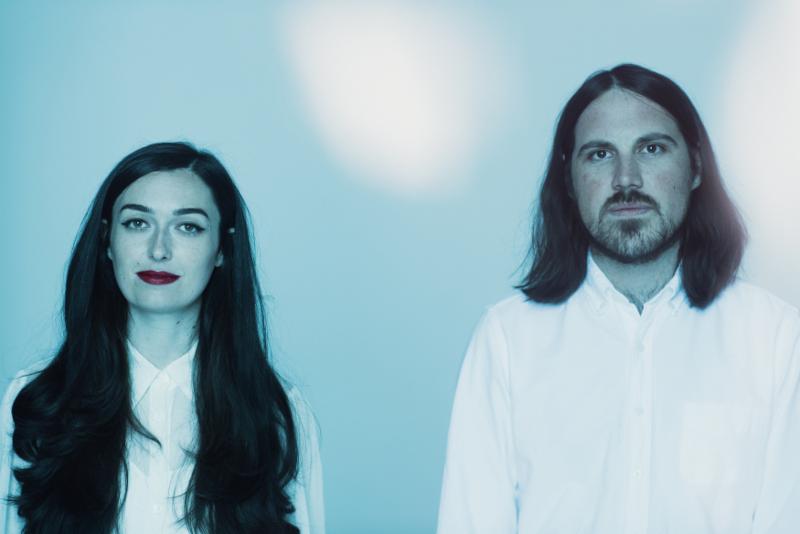 For Brian and Madeline of Cults, their many years on the record cycle, has left them pretty tired. Touring relentless since their first record a almost seven years ago, they’ve had virtually no room to slow down until now. Taking the time to work together on their upcoming album Offering (October 6) they’re darker and more fleshed out than ever. We caught up with Brian and Madeline ahead of the album to talk about recuperating, learning how to write again and digging tirelessly through demos.

Northern Transmissions: It’s been a few years since we last heard you guys, so what sparked this new album and have you been working on it for a lot of the time off?

Madeline Follin: Yeah, we didn’t necessarily finish the last record cycle and took a year off, we started working immediately but took our time to live our lives and be normal adults.
Brian Oblivion: Find real living situations.
MF: There hasn’t been a time between record cycles for us to live normal lives since we started around 20 to now at 26. We spent it all in a van on the road. We wanted to have real life experiences to write about.

NT: Things sound a lot more distorted on your latest single, has this been a gradual move or was this just what felt right when you went to record again?

BO: I personally feel like I’m a slow learner, so it took me a larger part of the early experimentation of this record to become a better arranger and producer, even learning how to really work electronic instruments. People who make music in Logic Pro will call me out and say I can’t believe he made that whole first record with presets. It was all very amateur. So I’ve been trying to get better and understand how these instruments work, and build arrangements in the songs to give space when you need it and fill it out when you want to, and not just youthfully throw everything at the wall.

NT: I also understand there’s a lot more big instrumentation and Pink Floyd influence to expect so are you guys moving away from the more brightly tinged pop you started off with?

BO: I think this is our most genuine record. I think before, especially with the first record, we’d say “We’re inspired by this, this and this,” and run with it. That’s kind of what you do when you’re a kid in a covers band. We tried to put our own spin on it but it was very much the “You broke my heart baby” kind of thing. This one was a much more conscious effort to incorporate a lot more of what we’ve learned and write from a more genuine place.

NT: How did writing the songs in a more collaborative manner change things?

MF: It’s always been very collaborative, but I feel like during the time between records, I learned a lot more and grew up a lot more. I felt more confident and wasn’t nervous to say something.
BO: It was great for me because I could say, “This song needs a keyboard hook,” and then go on a date with my girlfriend, come back and it sounded great. It’s amazing and it’s been an insane education for us. We would’ve graduated with our Ph.Ds by now considering when we started in music. We both started from basically square one too.

NT: I understand you guys basically built the album from two demos and made the album around those?

BO: Well the real turning point was about seven months ago when I made an iTunes playlist of all the demos we’d recorded. There was the horrifying moment seeing that it was 4 hours and 48 minutes long. It was like “Okay there’s got to be a record in here somewhere.” But all the song on the record were written around the same time. Because we write all the songs just the two of us, we have to impose a lot of sonic limitations. The early process is a lot of finding sounds and jamming. It can really bog you down if you don’t do that first because with the technology these days the options are limitless.

NT: What did Shane Stoneback bring to the recording of Offering and did he do more than just guide the process?

BO: First of all Shane is my best friend.
MF: No he’s my best friend. (Both laugh)
BO: When we’re together it doesn’t feel like work. But what Shane brought to the table the most, which I think we didn’t really realize was missing in the first six months, was the ability to feel like performers. It plays a weird trick on your brain, when it’s just yourselves and you’re not trying to impress anyone. I feel like you make your best stuff when you’re under the gun a little bit. He more than anything, provided that audience and confidence when we’d do something. For the first year of recording we didn’t play the songs for anyone, it was just us in a room, so to play it for him was a huge step forward.

MF: It was one of the first demos we had done, but we forgot about it within that four hour playlist. Towards the end we were going through and we heard it and we thought we had to work on it.
BO: So yeah it came together in a couple hours.

NT: I also know you’ve bounced around New York City, L.A. and San Francisco for the record, so what did this offer you?

MF: Shane lives in San Francisco, so we’d spend two weeks in New York, two in San Francisco. It’s good to leave for a while though and not spend too much time in a room, so you can just grind it out.
BO: We made this completely on our own, so we were moving all over, scheduling our own studios and working as much as we could. It’s not too different from what we’ve done before.