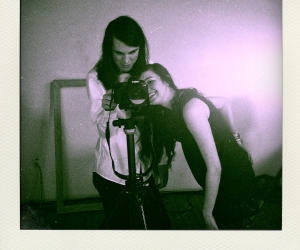 Cults have announced they’ll hit the road this fall, shortly after the October 15 release of their sophomore album Static.  Starting in Boston, MA on October 22 the band will travel across North America for headline dates in Washington, D.C., Austin, TX, Los Angeles, CA and many more (full list of dates below).  Cults will also make appearances at Launched Festival in Sacramento on September 7, Untapped Festival in Dallas on September 8, Life Is Beautiful Festival in Las Vegas on October 26/27 and Voodoo Fest in New Orleans on November 2.

Earlier this year Cults opened for Passion Pit on a handful of east coast dates leading into their performance at Bonnaroo.  The band also made festival appearances at Boston Calling, Seattle’s Capitol Hill Block Party and Denver’s Underground Music Showcase earlier this summer.   In the beginning of 2012 Cults played an extensive headlining tour before they retreated to NYC to record Static.

Static was written and recorded over the course of 2012 in the band’s home base of New York City.  The album was produced by Cults with support from Shane Stoneback (Sleigh Bells, Vampire Weekend) and Ben Allen (Animal Collective, Washed Out).  The band shared a self-directed album teaser which features tracks from Static including: “We’ve Got It” and “So Far,” view here: http://cultscultscults.com