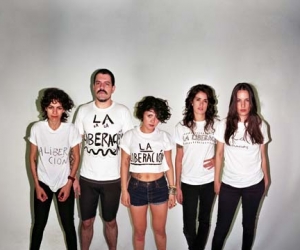 While nothing can compare to the fondness one has to their hometown, the temptation to live in sunny and glamorous Los Angeles is hard to resist. Some of LA’s newest residents include the ladies of CSS; natives of Brazil, they have temporarily set up residence to record their new album Planta and to prepare for their upcoming US summer tour, hitting many East and West coast cities in June and July.

But before they hit the road CSS has released their new office space dance party of a video for “Hangover”, choreographed by Toni Basil of “Oh Mickey” fame and also directed by Basil and Matt Dilmore.

Songs like “Hangover” stand emblematic of the enigmatic style they collectively harnessed. Co-written with Rancid’s Tim Armstrong, it straddles the lines between pop, dance, and punk, while never losing its edge or cheeky sense of humor with lines equating hangovers and heartbreaks.

“It’s about being young and having fun,” Ana admits. “We hooked up with Tim, and we talked about how much we love reggae and reggaeton. It doesn’t necessarily sound like that, but we came up with something that anybody can move to.”

CSS fans will get their chance to see “Hangover”, “Honey” and the band’s many more danceable tracks this summer on their June and July US tour. See the full list of dates below.