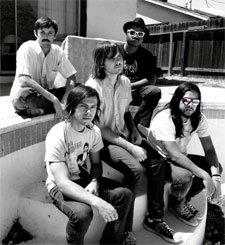 Crystal Antlers announced last month news of their signing to LA-based indie label Innovative Leisure, where they’ll share a roster with acts like Classixx, Rhye and Bass Drum of Death. Along with that came news of a new single, “Rattlesnake”

The band followed up today with an album trailer and revealed all the details of a forthcoming album, entitled Nothing Is Real, out October 15th on Innovative Leisure. The new album, which features cover art by famed surf/skate/graffiti legend C.R. Stecyk, captures a whole new sound from Crystal Antlers, presenting some of the strongest, catchiest and most accessible material the band has ever recorded. Check out the album trailer below, which was also directed by Stecyk.

In regards to the new album, Crystal Antlers’ Jonny Bell noted, “We’ve always experimented with lots of different styles while playing together, but much of it wasn’t captured on record. Through the albums, more and more of the picture has been revealed. I think we’re becoming more comfortable with who we are as musicians and people, and that’s helping us to embrace our history, which has existed pretty much outside of any scene, genre and the traditional music industry.”

Bell went on to say that “the new album finally felt balanced in it’s process, writing and recording. A big part of that was the fact that we had our own space for the first time ever (the studio I built at my house), and we were able to really stretch out. That enabled us to explore more pop ideas that would have probably previously been canned. We also were able to really focus on dynamics and having a very clear sonic feel to the record. We really strived to maintain the same spirit and energy that we had in the beginning, and that’s what ties everything we’ve done together.”

Crystal Antlers will be performing material off Nothing Is Real next weekend in LA, where they’ll perform at FYF Fest on August 24th.

Nothing Is Real Tracklisting /