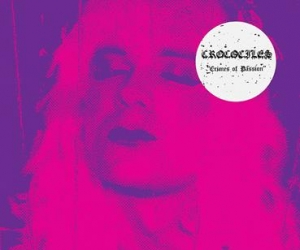 “Hey chief, there’s no use crying over spilled milk,” says Brandon Welchez at the end of “I Like It In The Dark” off the newest Crocodiles LP, “Crimes of Passion.” And this seemingly insignificant line actually sets the tone for the album’s melancholic yet strangely uplifting nature.

Crocodiles — consisting of Welchez, Charles Rowell, Marco Gonzalez and Robin Eisenberg — infuse their San Diego indie rock roots with punk rock psychedelia without losing their lighthearted, hopeless romantic charm. “Crimes of Passion” clocks in at just over half an hour of 10 short, sweet and to the point tracks. Lyrics aside, the instrumental work is refreshing and captivating. But it is in fact the lyrics that make the biggest impression. Welchez sings of hopeless romance, broken hearts and modern melancholy. Tracks like “Heavy Metal Clouds” and “Marquis De Sade” prove Crocodiles — and Welchez especially — can be deeply self-reflective while “Gimme Some Annihilation” and “Cockroach” show a more punk rock approach to the album.

Aside from its broken heart lyricism, “Crimes of Passion” is not an album that can really take you places lyrically, but where it lacks in lyrical diversity it makes up for it with beautiful and electrifying guitar work. Essentially, it’s the instrumentals that drive the album’s energy and success, while the lyrics give the album substance and narrative. Although it’s clear that Crocodiles strived to create a tight package of tracks that conform to a single aesthetic, it would be refreshing to hear more diversity within the progression of the album.

That’s not to say that the album isn’t a solid artistic composition, because it certainly entertains. But diversity can make a great impact, especially considering the sheer talent that Crocodiles exemplified in “Crimes of Passion.” Of course, Crocodiles — formed only in 2008 — has an enormous amount of room to improve, and the necessary diversity will come naturally.

The album is entertaining and simple, which is great if you’re looking for a soundtrack to a road trip or just some easy summer listening. As a whole, Crocodiles impresses with “Crimes of Passion,” but they leave listeners wanting more, and that’s okay.