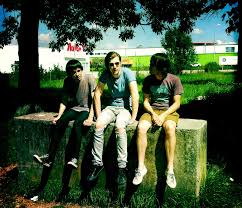 The Cribs have announced details of their new album For All My Sisters which will be released in North America on Arts & Crafts on March 24th. Having reconvened over the last year in Wakefield, UK and Portland, OR, the band later decamped to New York and settled in at The Magic Shop studio to record with producer and The Cars ‘frontman Ric Ocasek (Weezer, Bad Brains). The band’s sixth studio album follows 2013‘s career spanning Payola collection and 2012‘s In The Belly Of The Brazen Bull, is The Cribs’ first release for the independent label Arts & Crafts.

The band will be touring in support of For All My Sisters, beginning with a handful of dates this spring. Their first shows in the US since 2012 will kick off with an intimate three-show residency in New York City. A special limited three-show pass for the New York shows is available with the ticket pre-sale today. The Cribs will continue on to Austin for SXSW and then to the West Coast through San Francisco, Los Angeles, and more alongside performing at this year’s Coachella Music Festival.

For All My Sisters Track Listing

3. Burning For No One

The Cribs On Tour