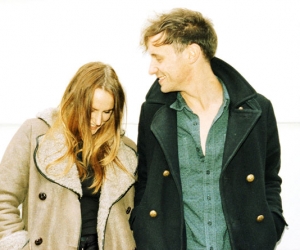 60’s infused, indie psych-rock duo ‘Coves’ released their debut EP Cast A Shadow and follow up single “Last Desire” in 2012. The band has just released the new single “Beatings”, their debut album will be out sometime in 2014.

Coves, comprised of singer Rebekah Wood and multi-instrumentalist John Rigard, will headline London’s Electrwerkz on November 7 to celebrate the official release of “Beatings” (November 11 in UK; North American release date TBD), the first single from the band’s forthcoming debut album. Mixed by Brendan Lynch (Primal Scream, Paul Weller), Clash Magazine says of the track, “With those driving, Spector-esque drums and that sweeping grandeur, theirs is a teenage melodrama fuelled by a passion for noise…swirling psychedelia with a visceral edge.”