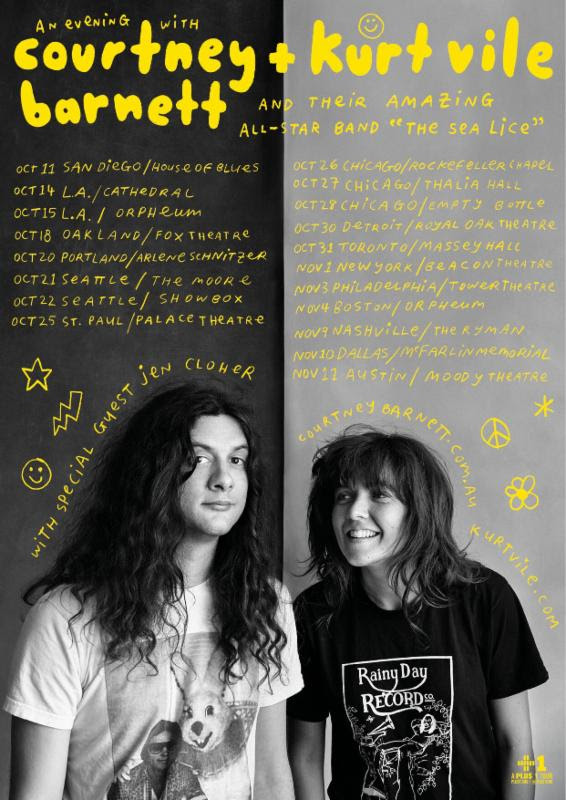 Courtney Barnett and Kurt Vile will lead an all-star band on a tour of North America this fall. The announcement comes as the two singer-songwriters reveal that they have completed a collaboration album for release later this year.

The duo will share the stage, performing songs off their upcoming album as well as delving into their respective back catalogues and covering a bunch of classics, all backed by their band ‘The Sea Lice,’ a revolving cast of musicians including Janet Weiss (Sleater-Kinney, Wild Flag), Stella Mozgawa (Warpaint), Rob Laakso (The Violators, The Swirlies, Mice Parade) and Katie Harkin (Harkin, Sky Larkin and touring member of Sleater-Kinney and Wild Beasts). “A cookin’ band and an intercontinental country duo for the ages-minus the country,” says Vile.

Courtney recalls the seeds of the collaboration:

“In 2014 I scored a support slot opening for Kurt at the Abbotsford Convent [outside Melbourne]. We met briefly after the show but I was a bit nervous and didn’t wanna bother him, just grateful for the gig. Years later we started bumping into each other on the festival circuit all around the wide world and we became friends. He hit me up when he was coming to Melbourne next and said he thought we could work together.”

As Kurt tells it:

“I just love her voice in general… great lyrics of course… I love all her music but the song that really hit me was “Depreston”-I know it’s popular but her voice is so good in that song and it’s so pretty and sincere… i’m a sucker for that kinda song: instant classic.

It started out as, maybe we’ll do a split 7″ together but then I figured let’s make it a 12″ so it doesn’t get lost in the world, shoot for 5 songs. It wasn’t until i had another KV tour booked for the following summer in Oz that we thought we should record as much as we can, just see what happens, no major goal to make it a full length, but it came together that way ’cause the vibe was so strong with everyone.”

For Courtney, the admiration is mutual:

“I’m a huge Kurt fan. Smoke Ring was one of my first purchases on vinyl. I was getting over a big break-up, unemployed and drifting and I would just lie on my bed and listen to ‘Peepin’ Tom’ on repeat. One of the most beautiful and luscious albums I ever heard. Me and Jen fell in love to that album.”

Kurt and Courtney have partnered with Plus 1 so that $1 from every ticket goes to support the ACLU and their work defending and protecting our individual rights and liberties. Support for the Courtney Barnett and Kurt Vile (and The Sea Lice) tour will be Australian songwriter Jen Cloher.

The album is the result of 8 days in the studio spread over almost 15 months when Courtney and Kurt’s respective touring schedules allowed for them to be in the same place at the same time. It will be released later this year jointly by Matador Records, Marathon Artists and Milk! Records.