“Connect” by My Gold Mask

The Chicago based indie electronic trio My Gold Mask released their latest LP, Anxious Utopia in March via Moon Sounds Records. Anxious Utopia is the band’s first release since 2013’s Leave Me Midnight, but their ability to create exhilarating pop songs with dazzling guitar riffs, pulsing synths and a driving beat all wrapped up in Gretta Rochelle’s sparkling vocals will have you nostalgic for the days when kids used to actually dance at indie rock shows. Though this record is definitely high energy, it’s really all about the struggles and anxiety that come along with being an artist or creative in an era of socially advocated technological interconnectedness, a topic Gretta has much personal experience with and is happy to discuss.

After leaving Brooklyn, NY and Baton Rouge, LA respectively, My Gold Mask founding members Jack Armondo (Guitar, Vocals) and Gretta Rochelle (Vocals, Percussion) both took life detours in Albuquerque, NM. Despite running in the same social circles there, it wasn’t until they moved to Chicago IL, and had a chance encounter at a rooftop party, that the two finally met. The conversation quickly turned to music and has stayed there ever since. In 2009, seeing the completion of a couple of short lived rock projects involving other members, the musical couple withdrew themselves and dedicated their time to experimenting with new sounds and broadening their artistic voices. This time away from the touring circuit lead to the birth of a home recorded experiment called My Gold Mask.

The tribal-like dance beats, the wall of sound production and the strong emphasis on fantastical vocal melodies all came together in a big way. “We like to explore those darker feelings that sometimes get left behind in pop music, even though we try to stay pretty light-hearted in our personal lives.” says Rochelle, and the band’s unique blend of influences has led them down many roads. MGM has had the opportunity of opening for groups such as The New Pornographers, Metric, and Blonde Redhead; as well as having had songs featured on Gossip Girl, MTV Awkward, Being Human and in high profile fashion shows for Phillip Lim 3.1.

But My Gold Mask’s true passion and focus has always been exploring new musical territory and growing as artists. A passion that was temporarily slowed when Rochelle went through a particularly strong bout of anxiety, experiencing the reappearance of her disabling attacks. Rochelle explains: “I’ve been dealing with my panic disorder since I was a little girl and have only recently really felt like I’ve gotten a handle on it. Making music has always been a cathartic way for me to work things out”. The band switched gears and began releasing a series of digital singles. Armondo on the process: “The singles gave us a way to keep up momentum while allowing Gretta and the band the time we needed to sort out some personal stuff.”

On Anxious Utopia, Gretta turns her anxieties into party like anthems that exorcise (and sometimes give life to) her personal demons in catchy, haunting tracks like “Connect” and “Insomnia.” Themes of struggle, release and redemption weave their way throughout an album that lets more light into the darkness than on past releases. Creating an energetic sound that Entertainment Weekly calls, “…a sweet spot between Siouxsie and the Banshees and Robyn.” 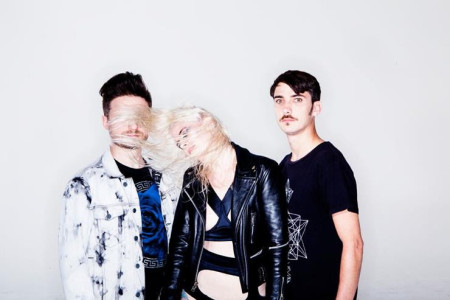 “Connect” by My Gold Mask