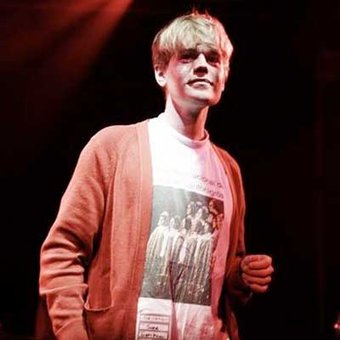 Connan Mockasin is excited to reveal details about his upcoming release, Caramel, out November 5th via Mexican Summer. His new album, Caramel, was named because he liked the onomatopoeic quality of the word — the music and words just followed. Mockasin explains, “To me, the word ‘caramel’ sounded so nice and as far as I know, nobody had ever used the word for an album title.” This helps explain the evolution from the labyrinthine, oddball-psych of Forever Dolphin Love to Caramel’s equally inventive and unique brand of mutated, lustrous soul, almost wholly self-recorded over a month in a Tokyo hotel room.

Born Connan Tant Hosford in Te Awanga on the east coast of New Zealand’s north island, he was set on a course to play guitar after hearing one of his dad’s Jimi Hendrix albums as young child, playing guitar incessantly as a child. After puberty hit, he took a hiatus and started surfing, as well as welding his own version of carnival rides and beach vehicles. Music eventually came back into his life after high school when he started his first band Grampa Moff (also a track title on Forever Dolphin Love). But it was Connan And The Mockasins (named after Connan’s hobby of making moccasins out of sheepskin and motorbike tire) that first made a mark. Without friends or contacts, the quartet decided to try their luck in London in 2006, sleeping on park benches when they didn’t have apartments (luckily it was a great summer). Once settled in with bar jobs, they found interest from record labels, but ultimately, Connan backed out of his first album deal. Jaded and discouraged, Connan returned to New Zealand.

It was his mother who inspired him to make a record with the few four track recorders he had lying around the house. Mockasin did not expect to release it; he just wanted to make a record for himself and his mother. However, he got more than he bargained when the resulting record, Forever Dolphin Love, received ecstatic reviews.

Fast forward several years, Mockasin was about to record Caramel with his band when he rushed home after his father fell suddenly ill. In the aftermath, he retreated to Tokyo, an influence that can be heard on tracks such as “It’s Your Body (Part Five).” Caramel has hints of Scritti Politti’s exquisitely stitched soul, or of Prince, if the legend had spent time in Canterbury, the epicenter of South East England’s progressive psychedila during the late ‘60s and early ‘70s. Mockasin is going places, but at his own pace, just as Caramel suggests the process of melting and taking on a new shape, a new taste. That is the true sound of Connan Mockasin.