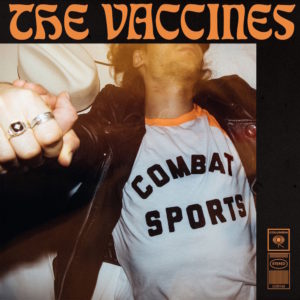 It’s been a disruptive period of time for The Vaccines; their third LP ‘English Graffiti’ proved hard to replicate live due to the record’s aesthetic leaning heavily on studio-treated sounds. Equally the album wasn’t widely received, although this writer thoroughly enjoyed the record, it bore a cartoonish sound that suited the band and showed a broadening of The Vaccines’ garage-indie schtick. More disruption occurred when touring ‘English Graffiti’, original drummer Pete Robertson left the band, with Yoann Intonti taking up the vacant drum stool. Whilst ruminating ‘English Graffiti’s heavily produced ways, the now five piece (Timothy Lanham has also joined the band on keys) opted to all get back into a room together to capture the raw and incendiary approach they had on their earlier releases. ‘Combat Sports’ is the result of the fivesome approaching their craft as a gang but the question is – has it recaptured the immediacy of when they first burst onto the scene in 2010?

With a title like ‘Combat Sports’ you’d expect The Vaccines’ latest album to be a lean, muscular record, full of punchy garage rock haymakers and uppercuts but what the band have offered up is an LP of mid-paced tracks, that are diluted by the addition of Lanham’s keyboard sound. The primal appeal of yore feels watered down, meaning deadly combinations are in fact feeble jams and don’t deliver knockouts like you’d hope for when it comes to the Vaccines ‘getting back to their roots’. The tone is set from the first moments of ‘Put It On A T- Shirt’, a muddied affair held together by a woozy fairground tone and the occasional burst of histrionics caught between being lowkey and grandiose. ‘I Can’t Quit’ and ‘Your Love Is My Favourite Band’ lack edge and vitality, it feels like the band could shift up a gear but the urgency that seems within arm’s reach doesn’t materialise.

To call them false starts would be harsh but three tracks in and ‘Combat Sports’ fails to land any kind of devastating punch; thankfully ‘Surfing The Sky’ grabs the album by the scruff of the neck, jolting the record into action with a quick one-two of urgent razor-sharp guitar lines and rapid drums. Vocalist/guitarist Justin Hayward-Young also sounds revitalised as his words carry a new-found dose of oomph. ‘Nightclub’ is another rambunctious moment, built on a serrated riff that mimics Blondie’s ‘One Way or Another’ and a pounding rock fall of pummelling drums that finds The Vaccines’ getting the balance right between pop, rock and noise.‘Out Of The Street’ is forged on punky vibes as it comes out swinging but it’s primal direction is reined in by Young’s falsetto as the song shifts away from the earlier punk roar and into a more pop-rock gear.

‘Combat Sports’ is an album that feels trapped in two minds, whether to attack or stand its ground, which means it mostly remains caught in limbo. What is ultimately frustrating is that when The Vaccines have a rush of blood to the head, they sound vital and thrilling, and when they strip everything back to just Young’s voice and a delicate celestial hue, like on ‘Young American’s delicate ode to unrequited love, ‘Combat Sports’ shows a rare glimpse of a fleshy underbelly. Sadly, there aren’t enough of these moments on the band’s new album. Less big pay-per- view standout out fight, more scrap in a school yard, it seems ‘Combat Sports’ is all mouth and no trousers.