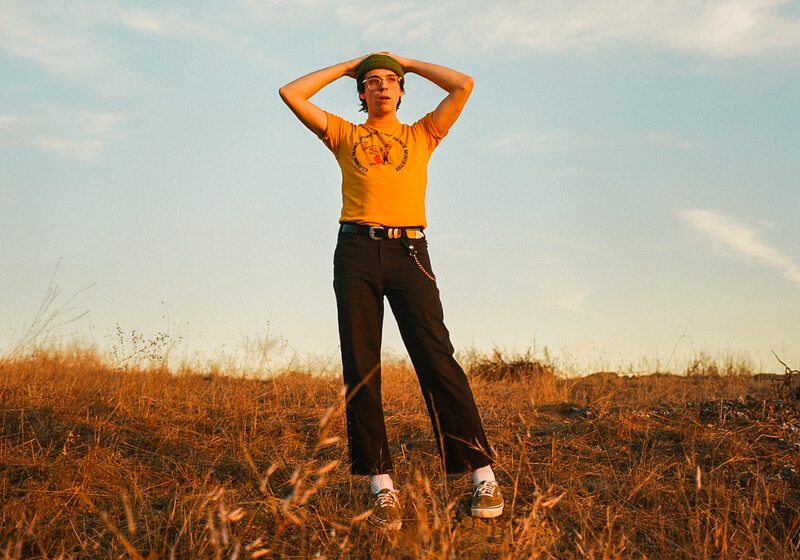 Coma Girls "Skyboxer."
Share on TwitterShare on PinterestShare on PocketShare on RedditShare on FacebookShare on Email

Coma Girls formed in 2014 in Atlanta, and they’ve since come a long way and travelled through a myriad of sonic (and geographical) territories to get to where they are now. After Chris Spino sold his belongings and moved to L.A. with a backpack full of clothes and a guitar. “Music is always the best therapy for me,” he says. though that’s fairly clear in his songs—the urgency and the vitality are palpable. Coma Girls are releasing their Skyboxer EP on December 17, today they are sharing the title-track, which is now available to stream.

The album Features a cast of Spino’s friends, seven other musicians as well as his himself on vocals, guitar & piano; Travis Popichak on drums; Marvin Figueroa on bass; Dan Gee on keys; Adam Laidlaw on guitar; Michika Skyy on backing vocals; and Connor “Catfish” Gallaher, whose talents can be heard on records from The Black Lips, Tim Heidecker & Weyes Blood, and more on pedal steel. Producing, engineering, and mixing is Tomas Dolas (Oh Sees, SASAMI, Mr. Elevator and the Brain Hotel).

“It really turns into a sonic circus,” Spino says of the EP. Though Coma Girls have never subscribed to a specific genre, its heart has always belonged to pop—Spino’s guilty pleasure. It explains the catchy, indulgent atmosphere of their self-titled LP; on Skyboxer, however, it’s not as evident. “I think this is an effort to bend that a little bit and push it into territory that gets stranger and feels bigger and explores different sounds,” Spino says, and then adds: “but it also retains what Coma Girls has always been about—pop songs.”

With his orchestra of friends, Spino was not alone in his musical ruminations. “We were able to explore each song differently,” he says, “but give it a common thread as well.” This collective way of creating yields a diverse, powerful piece of art that anyone can listen to or relate to. “It’s supposed to take you places,” he says. “It’s more like a form of escapism.” Skyboxer offers nearly 17 minutes of a safe hideaway from reality, where the listener can drift through a new, all-encompassing world.

The upside to the national lockdown is that it’s forced everyone into a meditative state, which Spino appreciates greatly. With clean time and therapy, he became more articulate and ready to create than ever. “It’s not conducive to my creativity to be up until the sun comes up every day,” he explains. “I’ve done more in the past six months than I have in the past five years. I’ve been insanely productive.” After this EP, there’s a lot more to come from Coma Girls.