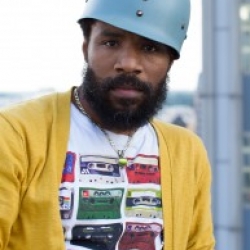 The Headphone Masterpiece, back in 2002, and again for the release of his follow up full length, Landing on a Hundred this past October, Cody ChesnuTT will be showcasing his live band across the country next month.

The soul troubadour whose frank, socially conscious ruminations on life continue to challenge popular notions of what modern soul music can look and sound like: a raw storyteller for the people wearing a guitar and a toothpick-chewing smirk; a wide-eyed, intense soul brother in a crazy-fly get-up singing about bedraggled love in the land of Lost Angeles – he’s all of that, but wiser now while still wearing poetic license on his skin like a battle scar. The Atlanta native has always stood his own creative ground ever since he first holed himself up in his bedroom to record The Headphone Masterpiece, armed with his DIY musical arsenal: a drum machine, an array of instruments, a dusty four-track cassette recorder and a giant pair of headphones to block out the world. The result was an unvarnished collection of songs – 36 in total, which alchemized his love of a multitude of styles: classic rock, rhythm and blues, pop, punk and gospel music.

Landing On A Hundred, Cody’s second full-length LP, marks his return to the music game after a period of family-man retreat and reflection that did a world of good for him after his meteoric rise to near fame. The title is a reference to the slang saying, “Keeping It One Hundred,” or telling the whole truth, and for lovers of true blue Southern soul this new album is a must-have — he recorded it with a ten-piece band in Memphis-based Royal Studios, the sonic birthplace of some of the deepest works by soul and blues luminaries like Al Green, Buddy Guy and Ike & Tina Turner. “The original tracks were cut on two-inch tape,” Cody explains. “My hands were tingling because I got to sing on the actual microphone that Al Green recorded with. Nothing has changed. The downhome acoustic treatments are still in place.”

Topics on Landing On A Hundred cover lots of grown-folks business: a man’s road to redemption after years of womanizing and crack addiction, the power and labor of slow-burning marital love that eclipses mere material expressions of affection. Keeping it truthful is ultimately what matters most in Cody’s songs: how it reveals itself in your darkest thoughts, how it can heal old wounds with a handclap and a foot stomp. Truthfulness emanates from Cody’s vocal chords and the strings of his guitar.