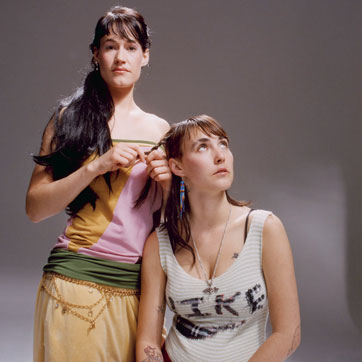 CocoRosie is the potently poetic musical project of American cross-disciplinary performance artists and sisters Sierra and Bianca Casady. The visionary duo approach their craft with a startling ability to tackle the most taboo of subjects with complete honesty and spiritual freedom. Creating songs that blend a myriad of styles and references ranging from folk and opera to hip-hop and reggae, the sisters often transform the most painful of experiences into memorable, evocative pop anthems. Taken as a whole, CocoRosie is an ongoing dialogue between the siblings. Each sister has her own persona and vocal delivery; Bianca delivers hard-hitting truths in a child-like voice while Sierra responds in pure open tones, playing a range of instruments including the harp, flute, piano, and guitar.

Back with their fifth album, entitled Tales Of A GrassWidow, CocoRosie produced their latest effort in collaboration with Icelandic composer Valgeir Sigurðsson and incorporated a host of guest performances, including frequent collaborator Antony Hegarty and longtime beatbox cohort Tez.  Out in North America on May 28th, the sisters decided to move forward with a self release for their latest offering, overseeing all aspects of the album release cycle from the perspective of an artist, subsequently gaining insight and a new level of control over the complete process.

In addition to all of this, CocoRosie will be touring extensively around the world in 2013.