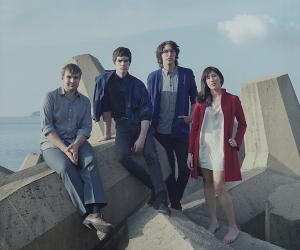 Cloud Control first caught our attention with their debut Bliss Release, winning them fans around the world. After the success of Bliss Release and subsequent worldwide tours, the band is now back with its most accomplished and expansive album to date, Dream Cave, out September 17th in the U.S. on Votiv.

Originally hailing from Australia’s Blue Mountains and now residing in the UK, Cloud Control is made up of Alister Wright, Heidi Lenffer, Ulrich Lenffer and Jeremy Kelshaw.

Dream Cave undoubtedly marks the evolution of Cloud Control’s elegant, psychedelic pop sound, a growth that is the result of three years spent living, writing and playing in the UK. As frontman Alister Wright explains, “we’re all feeling pretty proud of it. I think that’s all you can do, try and make something you like and put it in the world – maybe people will like it, maybe you can change a couple of perspectives.”

In addition to a North American tour this August, the band will be opening a full UK and European tour with Local Natives this fall.