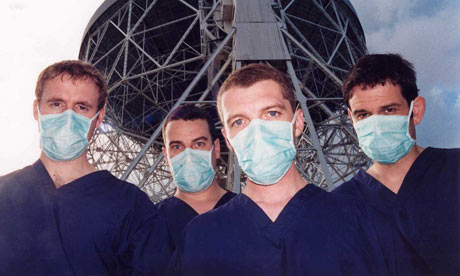 Share on TwitterShare on PinterestShare on PocketShare on RedditShare on FacebookShare on Email
Masked Liverpool quartet Clinic have announced a spring North American tour in support of their seventh full-length album, Free Reign, which arrived in stores in November on Domino Records. The tour will be the bands first since the fall of 2010, kicking off in New York, April 19 and 20, hitting the Austin Psych Fest on April 28 and wrapping in San Francisco on May 2. In addition Clinic have premiered a psychotropic video for the track “Seamless Boogie Woogie BBC 10pm (rpt)” directed by Brendan Canty of Feel Good Lost – watch it here.

Produced by the band themselves in their Liverpool studio and mixed with the assistance of Daniel Lopatin (Oneohtrix Point Never), Free Reign saw Clinic taking their sound into new depths; what was taught and manic delved into the dark abscesses of the mind, finding both beauty and horror sometimes in comingle. The years have seen Clinic flirt with the mainstream (2003 Grammy nomination) and be cemented into cult firmament alike, without ever really courting either acceptance directly. Their craft, one that has always bloomed in isolation and seemed impervious to the fickle tide of trend or fad, remains both resolutely eclectic and acutely focused.

Domino Records has also just announced a digital alternate version of Free Reign, entitled Free Reign II, will be made available digitally in North America on March 5. The album features unreleased Daniel Lopatin mixes of each track in reverse order, plus an unreleased bonus track from the Free Reign sessions, “Done & Dusted”.