Christine and the Queens shares “Jonathan” 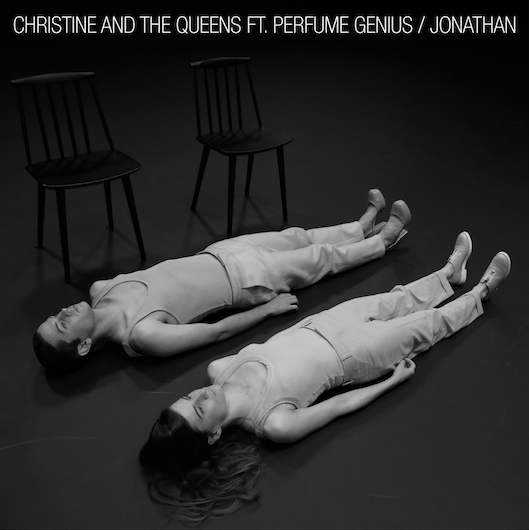 Christine and the Queens has shared the single “Jonathan” featuring Perfume Genius, taken from her self-titled English debut album release on October 16th via Neon Gold / Because Records / Atlantic Records.

Perfume Genius says: “I’m proud to play a small part in a project of such vision and heart. I believe in Christine and the Queens.”

Christine and the Queens says: “I grew up with a poster of Klaus Nomi on my wall. The big, sad eyes piercing through his chalky face seemed to testify that somehow, a man was underneath it all – and the very idea that the creature was adored while the man ended up alone never ceased to puzzle me. His disease was then something that made you lower your voice. And shame is something queer culture still fights today, with new words, new ways of existing.

Klaus Nomi chose to be supernatural, Perfume Genius chose to stare right back at you, smoking a cigaret with his nails polished, and as for me, I tried my best to make all my wounds pop. It’s all about being loud and fierce – shame is nothing but an insidious negation : you shrink, you whisper, you hide.

I wrote “Jonathan” because my lover would ignore my existence outside of the closed, silent room I lived in ; it became then imperious for me to sing, just to make sure I was still here. From the start, the song had two voices ; one in english, one in french – longing for an answer I knew I would never get. So it was there, on my computer, crepuscular, like my own little Mrs. Butterfly’s swan song.

And then, I got lucky enough to ask Perfume Genius if he would like to sing with me. He cannot be ignored, because his voice melts every stone, because he doesn’t hide ; without him, the song felt like dying, but now, it’s more like the promise of something healing through the pain. This is what I learnt with artists like Klaus Nomi, and still love with ones like Perfume Genius : you’re never as strong as when you allow yourself to be the most vulnerable person you can be.”

The album debut comes right at the start of her major 16-date North-American tour with Marina and The Diamonds which will go through California, Portland, Canada, Seattle, Salt Lake City, Denver, and end with 3 New York shows; two at Terminal 5 and a solo headline show at Webster Hall.

Christine and the Queens came together in London where the Nantes-born Letissier went after studying art and theatre. The artist – named in honor of Christine’s cross-dressing friends at Soho’s famed Madame Jojo’s drag bar – released a series of three EPs beginning in 2011.