“Choke” by The Soft Moon 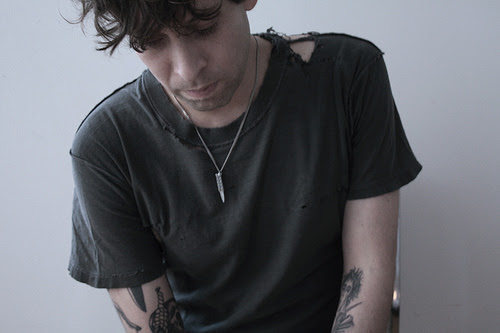 The Soft Moon has released his new single “Choke”, the track is off his fourth studio album, Criminal, and first for Sacred Bones. The full-length is described a confessional work, through the stark lens of shame and guilt that has followed Luis Vasquez since a violent childhood growing up within the humming ambient sprawl of 80s Mojave Desert, here he documents the gut-wrenching sound of going to war with himself. Battling with his own sanity, self-hatred, insecurity, self-entitlement and grappling with the risk of these things transforming him into a person he despises, Vasquez has laid his feelings bare with this: his confession and most self-reflective work to date.

“Guilt is my biggest demon and has been following me since childhood. Everything I do strengthens the narrative that I am guilty” Vasquez reflects. “The concept of ‘Criminal’ is a desperate attempt to find relief by both confessing to my wrongdoings and by blaming others for their wrongdoings that have affected me.”

Working once more with Maurizio Baggio, who produced Deeper, at La Distilleria in Bassano Del Grappa, Italy, Criminal sees Vasquez further explore putting his lyrics at the forefront and letting his raw emotions flow. The album begins with a confrontation with his true self through the torrid bass lines and searing vocals of “Burn”; a song evoking a loss of control akin to demonic possession, stating: “Eyes, reflecting the person that I am, and it burns”. In this track Vasquez’s guilt bores deeper and deeper into a condemnation that ultimately is: “Fire, hell is where I’ll go to live, so I burn”.

The album closes with title track “Criminal”; a despondent resignation to guilt; bereft, broken, and bruised, with lyrics that confess: “It’s the way I cross the line, it’s the way I open, it’s the way to my decline, it’s the way I’m broken”. The song, like the album itself, is Vasquez’s way of holding himself accountable and seeking redemption for the abuse he inflicts on himself, and acknowledges roots in the abuse which, inflicted upon him as a child, broke him