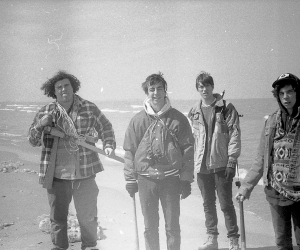 When 19-year-old Chicagoans Cadien Lake James, Clay Frankel, Connor Brodner, and Jack Dolan finished high school a year ago, they were under the impression that things had to change. They were expected to go to college, and more importantly, had to deal with the reality of breaking up their band, Twin Peaks, which had just started to get some notice. Three of them committed to Evergreen State College in Olympia with the idea of keeping some semblance of the band together, but it was clear that there was a magic the four of them had. All this happened BEFORE a pivotal self-booked, three-week tour in the summer of ’12. They had just recorded their debut album, Sunken, in Cadien’s basement, hit the road in earnest, and everywhere they went, one thing remained the same. After seeing the energy, power, and exuberance of their live show, people in every town and members of every band they played with urged them to see this thing through. However, real life is rarely so kind or easy. Deposits were paid, dorm rooms reserved, promises made. Cadien, Connor, and Jack were headed north to Olympia.

It’s a funny thing how clarity and circumstance can set and reset the table. After one semester at Evergreen, peoples’ compliments still ringing in their ears, the self-described “industrious dudes” decided to quit school and give Twin Peaks a fair shake. They returned to Chicago in December, reunited with Clay,

Sunken is out July 9th on Autumn Tone.