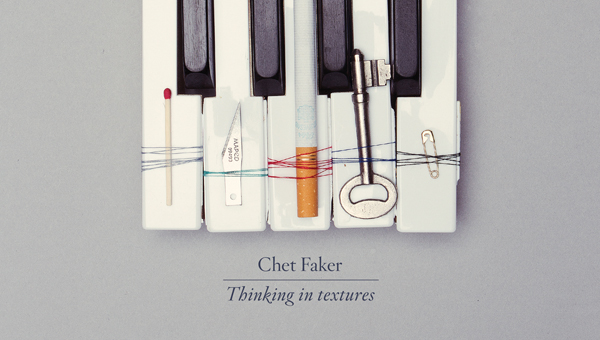 When I was in Australia a few years ago I came across a band called Squakin J Hawkins.Their punny name was part of their shtick, and although I really liked their music, I wondered if their moniker held them back from being taken seriously. Hailing from the Melbourne, Australia house and disco scene, Chet Faker has been making some noise as he is about to release his debut EP to North America “Thinking in Textures”. While the name stands out at first, I wonder if people will take him as the real deal, or just fall into the category of other great pun bands that never made it big like Furious George or Test
Icicles.

Faker first started to make some buzz with his cover of Blackstreets ‘No Diggity” which does make an appearance on the EP. It brings to mind some of the music lessons that I’ll engrave in my tomb for adventurers to find after I die: Beware of the artist who gets notoriety with a cover song. Memories of Orgy’s “Blue Monday”, and Alien Ant Farm’s “Smooth Criminal” come up, and while they never really get very much respect or credibility in the music world, you have to hand it to people that have the balls to do it, because let’s face it, most music is just rehashed/reworked classics anyway, so why not
just cover an already cool song? There’s just something not quite right with Baker’s “No Diggity” though, the song already oozes cool and Faker tries to pile on to it by jazzing it up, and while the song works, it’s doesn’t exceed the original. Plus the song is a classic 90’s track, so he’s got a big mountain to climb, because if you don’t distance yourself from the original then well, people will just like the old one better. He might have been better off covering a lesser known hip hop track to rework, because his slow soulful take sounds alright, but it’s not very memorable. Easy and soulful is pretty much what makes Faker tick. He also doesn’t mind throwing in some house beats to make it the ultimate
3am high come down mix. Faker’s jazzy beats throughout the album do work for his sexy mantra with such tracks “I’m Into You”, and “Love and Feeling’. It’s the soundtrack that a lot of ladies throw their panties off for, or at least guys think that it does. I can see why Chet is growing in popularity lately, but I’m just not hearing anything that tells me that he’s anything more than just a mysterious Australian indie artist that has to rely on a pun name and cover tracks.