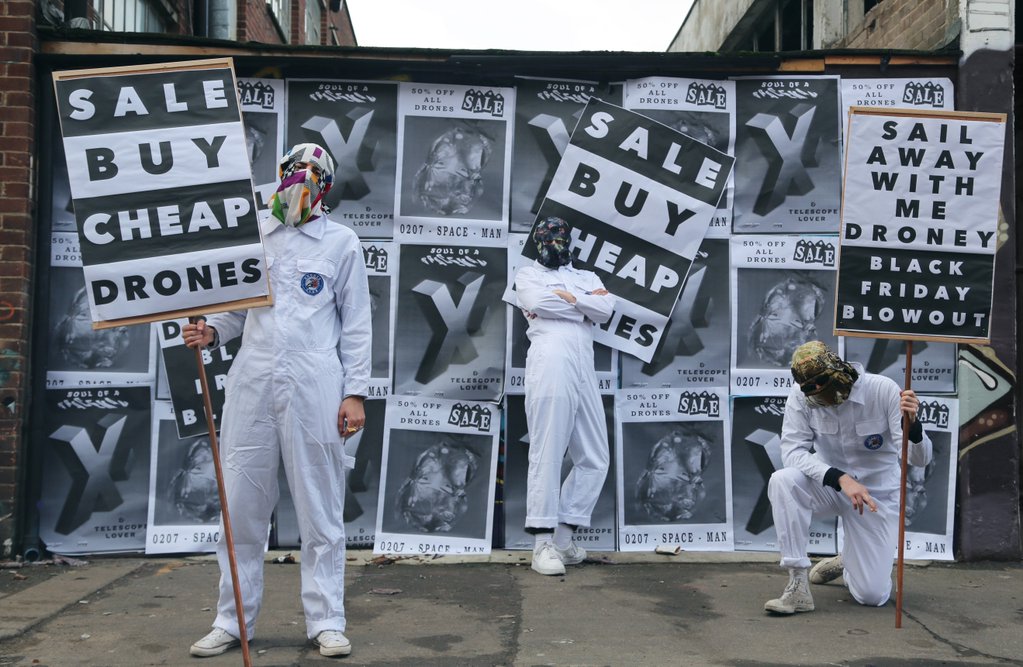 UK’s Drones Club, recently released their single ‘Chelsea Girl’, a collaboration with Georgia which is available now via PMR Records. The London collective’s next London show will take place at the Old Blue last on November 24th.

“Chelsea Girl” proves something of a Trojan horse: it’s in fact, say the band, “a protest song. As simply and directly as possible we want to draw attention to the plight of Chelsea Manning, the former US army solider who shed light on the darkness at the heart of western civilisation and made our world brighter. Now she is undergoing gender transformation in solitary confinement in a military prison. A heroine, a saint, branded a traitor and isolated from the world she helped.” Despite the tragedy of the situation, for Drones Club the euphoric uplift of “Chelsea Girl” signals “a song of joy, of light over darkness; a message across the sea letting the loneliest girl in the world know she is not and never will be alone.”

Drones Club formed in the spring of 2015, seeking to reconnect people in a low-attention economy. A typical gig has been described as part-way between a religious ceremony and a political rally: when they played at London’s Corsica Studios, they transformed the venue into their vision of a devotional, revolutionary space, with thick layers of smoke and chopped’n’screwed gospel music filling the air. Then there was the time they stormed London Fashion Week, staging a guerrilla gig while decked out in balaclavas and boiler suits (and earlier this summer, in commuter-packed tube stations). The band also recently staged a protest-show at the Conservative Party conference, offering out lambs’ hearts to a government they feel fundamentally lacks one at its centre.

It’s fair to say that these aren’t the sort of shows that most new bands play – but then again, it’s fair to say that Drones Club aren’t like most new bands. While they are ostensibly a London-based collective who write exquisite electronic configurations, they favour a model that’s collaborative rather than competitive, functioning as a group, an organisation, a beacon of ideas. Think the conceptual hijinks of Bill Drummond, the mock-corporate organisational structures of Devo, or the situationist ideas of ZTT and transplant it onto ultra-contemporary pop song writing and production.

With additional remixes to come from Dinamarca and Lxury, all ‘Chelsea Girl’ proceeds from PMR and Drones Club will go to the Chelsea Manning Support Network.