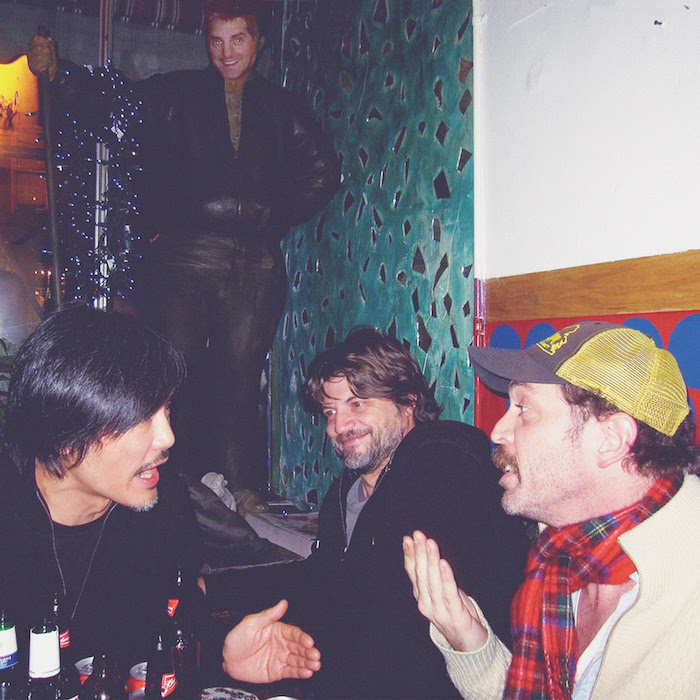 It is both a blessing and a curse to be born with a penis. Freud knew this. So did Candy Darling. And so, mutatis mutandis, do the men of Chavez. They are phallus-wrestlers of the highest order, as evidenced not only by the muscular sensitivity of their music, but also quite literally by the title of their new EP, Cockfighters. Three songs in nine minutes; a new chapter and a willful engagement with the masculine issues—both hidden and overt—of our time.

To those of you who now implore, “Tell me the tale entire of Chavez,” we would caution that history is one big flaccid schlong draped across us all. Its inches are the measure of humankind’s institutionalized lies. So we don’t want to spend too much time on the past. But, for the sake of completion, we’ll blast through the pertinents real quick: Chavez was an integral part of the Matador Records 1990s ejaculation of genius. With a bit more arena-rock in their DNA than most of their labelmates, Chavez took the nervous structures and ruminative lyric modes of the Indie Rock Pleistocene but added, deeper and more effectively than their peers, an injection of glistening testosterone-maximized amperage to the mix.

The band is composed of four gents, varied and successful in their non ‘Vez pursuits.

Bassist Scott Marshall is a filmmaker who works and surfs in Malibu each and every day. He is lifelong friends with Anson Williams, which is a true fact you can research if you wish.

Drummer The James Lo, who is distinguished as a human in 2016 by the lack of a Wikipedia page that captures and classifies his essence in digital formaldehyde, is ambivalent about this rock music thing. He spends his time designing sound for contemporary dance and creating bits of hardware and software for music and theater.

Guitarist, riff-writer, and purveyor of harmony vocals Clay Tarver is a screenwriter who has worked on all four seasons of the HBO series Silicon Valley. He won a WGA Award in 2015 and subsequently, as he tells it, “nearly shit [his] pants onstage in a Men’s Warehouse rented tux.”

Guitarist, lyricist, and lead singer Matt Sweeney is a knight errant of studio and stage who has played with everyone from Iggy Pop and Neil Diamond to Bonnie ‘Prince’ Billy, Adele, and Run The Jewels. When all us humans have finally moved on from this Earth and are grooving as one spiritual mass to the great afterlife band of eternity, we will surely find Sweeney at the lip of the stage.

For now, in the material world, we walk around in our mortal fleshbags looking for good things to listen to—which is where these new Chavez tunes come in handy. Aside from a scattered drippage of shows and some new vocals on a greatest hits set, this here is the first public utterance from Chavez since 1996. But please put away your hot branding iron that says REUNION in the Wrangler? font. You will not be able to use it on the exposed flesh of Chavez because, technically, the band never broke up. They just noticed that the less they did, the more people wanted them. So they became a wee bit diffuse in their approach, getting together now and then over the years to proverbially noodle in the proverbial woodshed. One of the songs on this EP has its roots back in 1997; another took form mere months before the recording session.

Cockfighters Tracklist:
1. The Singer Lied
2. Blank In The Blaze
3. The Bully Boys