Our chat with Huichica festival co-founder 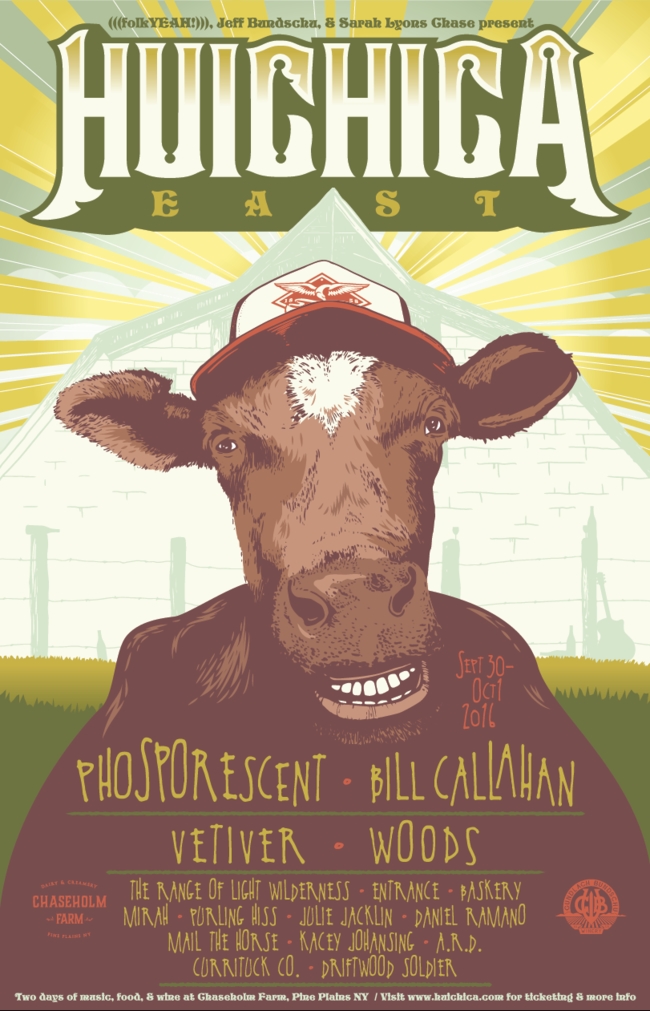 Winery Owner Jeff Bundschu and Fruit Bats Eric D. Johnson have been putting on a small “Micro” music festival at the Gundlach Bundschu winery in Sonoma California since 2010. With a focus on hand curated local food vendors, beer makers and Bundschu wine – Huichica festival has been extremely well received in and around the San Francisco valley as a more intimate and sophisticated alternative to mega festivals like Coachella. Bundschu and Johnson have managed to bring out some pretty big names in the 7 years under their belt, including past performances by J. Mascis, Cat Power, Blitzen Trapper, Cass McCombs and Atlas Sound.

The friendly boutique festival has been so successful that, for the first time, it will bring its hyper curated hospitality to the east coast this fall, occupying a 350 acre dairy and beef farm in the Hudson Valley of New York state. Performers for the weekend include Bill Callahan, Phosphorescent, Woods and Purling Hiss.

We caught up to chat with vinter, festival curator and music enthusiast Jeff Bundschu to discuss this years New York incarnation of Huichica and how he got himself into 7 years of festival business.

NT: Jeff, how did you decide to pair the wine business and the music business – when did this idea kind of materialize?

Jeff: Well, my family has been in the wine business here since the 1800’s and we have a lot of heritage of celebrations around the harvest, to celebrate the wine. They’ve stemmed from family celebrations to, over the course of the history of Sonoma, establishing festivals. Later on in the history of the winery, I grew up with a dad who was very musical and kind of literary in what he appreciated and any chance that he had to sort of bring that together he would do – knowing that wine is best experienced in the context of people and conversation and maybe even outside stimulation in the form of music or art or what have you.

In the 90’s Jeff would find himself in Los Angeles, going to school and playing in bands. It was then he found himself with a decision to focus on that or turn his attention back to family business. He succumbed to pull of wine country and in his own words “found that other part of me sort of go dormant for a while” as he was growing and establishing more and more of a wine reputation. One day about a decade or so ago, he thought it was time to integrate his other great passion, music, into what he had become so successful with – the wine.

“I said this is crazy, I love music, we have a performance space, I love the idea of showcasing the kind of music and youthful energy that I like within the context of our site and our wines – so its kind of been a slow build from there. Its been from a really authentic standpoint, we’re doing this from a perspective of whats good for the artists, the fans, and its worked really well”

“The one off shows started first (the winery hosts shows throughout the year). I had one buddy of mine that had stayed in the music industry as a tour manager for a lot of the indie bands around that time and he helped me wake back up about how awesome the music was – and not knowing if it was going to work or not I just started looking at bands who were routing through between Portland and San Fransisco. They always have at least a day between those places and I would just call the agents to see if they’d be into stopping here and playing in between. We has a couple early successes. I was worried – could we get a band to play? Could we get people to come out? We’re not far from San Fransisco but we’re in the country, we’re a winery. One of the first shows we did we had Jonathan Rice, and he brought a long his then partner Jenny Lewis who watched as part of the audience. She liked it so much that she agreed to play later on. And it just sort of built that way, people started to come out and more and more people wanted to play our winery.”

As bands began to learn about the Bundschu winery and their old performance barn, the warm crowds and beautiful settings, Jeff met Fruit Bats Eric D. Johnson back stage one night while the band were touring with The Shins. They talked about the concept of doing something more with the winery shows. They mused about the idea of a big gathering of people who were “really nice” getting together to drink good wine, eat good food and see great live music.

“The ‘nice’ thing, crazy as it sounds, was the most important thing. Just because someone can make good food or music doesn’t mean they’re necessarily going to be nice people to be around. Literally the thought was why don’t we create an environment where thats a prerequisite. Literally thats what we were trying to do was to get copesthetic people to come and hang out. So we did that with Huichica Sonoma, and about 5 years ago we kind of realized we had something really magical. Festivals were getting so big and crazy and we almost didn’t want to call ourselves a festival given how different we were. We’re a micro festival, we’re very small. Theres a small artist area but for the most part everyone is just hanging out there together and it ends up being a really unique and fun environment”

NT: Do you think the small more curated festival is the future, as mega festivals get less and less appealing?

Jeff: I hope so, you know theres too much Talent out there. You shouldn’t have to elbow your way through 80,000 strangers to go see your favourite artists.

NT: How did you decide to bring the concept to Hudson Valley?

Jeff: Id never been to Hudson Valley, I only know it in the same way someone on the east coast would have a vision of California and wine country – I had that. I knew it was there and I’d always been interested in its food and wine – farm to table culture. And obviously it has a really rich musical history too. So we thought it would be cool to do something out there and, then we found this amazing venue and it just started to become a reality.

NT: How did you find the venue, Chaseholm farms, and the various vendors and local products and people who are taking part?

Jeff: It was basically just random. I was just pipe dreaming about how we could do this, and started randomly looking at other wineries because I know Hudson Valley has their own wineries. But I thought no thats not going to work, we want to use my families wine obviously so I started looking at other farms. So literally, I got lucky, I found the Chases scouring the internet for farms. They had a look about them, I thought they were young enough that this might be of interest to them and I took a flier on them, and they took a flier on me. It was a little wacky to get a random call from California, then I took a random trip out there during a major snow storm to check it out and meet them. And then it was just serendipity. Turns out they were friends with Melissa Auf der Maur who was in the band Hole and now owns and runs the Basilica Hudson arts and performance venue (site of the annual Basilica Soundscape music festival). So between the festival history in Sonoma, the people I had working around me, Melissa doing a little bit of homework on behalf of us all – it really wasn’t hard to get the bands to sign on.

NT: Which artist are you most excited to see in Hudson?

NT: Top 5 performances in the 7 year history of Huichica?

Jeff: The Phosphorescent one was one of them for sure. Um, Damian Jurado was epic. Fuzz, Ty Segall’s band was mind-blowing, Dinosaur Jr and we just had Iron and Wine and that was another epic one.

NT: Thanks so much Jeff and good luck with the festival weekend.