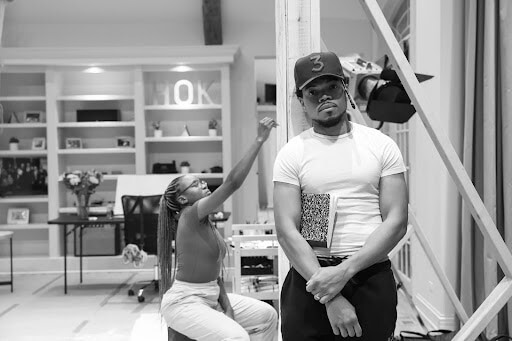 Chance the Rapper has dropped “Child of God,” the new single features Moses Sumney and contemporary art project debuted today alongside Global artist Naïla Opiangah. The new project explores the relationship between music, cinema, and contemporary art redefining the concept of ‘album art.’ The multifaceted art experience is open to the public from now through Tuesday, March 29 at Chicago’s Museum of Contemporary Art.

At the top of the year, Chance took a transformative trip to Accra, Ghana. By fate, Chance was introduced to Naïla Opiangah, a Gabonese painter whose work explores concepts of identity, self-reflection and interpersonal relationships, through an abstract depiction of nude Black women. The two connected on a higher level and Chance knew that Naïla had to be a part of his new project.

Chance and Naïla then reconvened in Chicago at Chance’s House of Kicks studio to create “Child of God’s” visual component. While Naïla created a 6 feet wide by 11 feet tall painting, Chance worked his magic behind the camera, documenting and directing. The final form is a multifaceted work that extends beyond a conventional song; redefining the possibilities of what a single and its single art can look like; ultimately signifying a new era for Chance the Rapper.

“Child of God is a candid representation of the exchanges between two creatives of different artistic backgrounds, mediums and platforms. It’s a visualization of our mirrored experience,” Chance the Rapper & Naïla Opiangah.

“Child of God” is also an illustration of the growing discourse on freedom and agency of artists in a very limiting arts and music industry. It’s the beautiful product of a genuine collaboration between artists responding to and building off of each other, without being circumscribed to predetermined rules and structures.