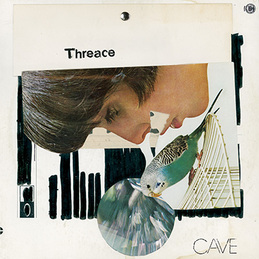 CAVE’s new album, Threace, out October 15, 2013 on Drag City, might just bring an end to your party – no more dancing, no more talking, just people listening to every last clang, tweet and honk of a band really getting after it. Recorded on a 1″ 8-track Studer machine that may or may not have spent some quality burn-in time at Muscle Shoals, Threace was half-planned and half-jammed using different mic placements, building up from a basic set of as few mics as possible. Then, they got out the razor blade and…well, this isn’t the Rolling Stones! They used it to cut tape (and realities) together into a metro-musical albumen that’s only started to flower in this world.

Threace comes on guitar up and jelly tight, saving the keys for color commentary among the beats. Jeremy Freeze (guitar) and Cooper Crain (guitar, organ) explore their six-string relationship, finding shared space, ducking, parrying, working the edges, and finally, twinning to gut-clutching effect. Meanwhile, there’s a cameo appearance from sax and flute textures in here that create new soul-jazz sensations. Last and most, Dan Browning (bass) and Rex McMurry (drums) bring the heavy with the thickness while moving rhythm with exceptionally light feet, playing coloristically while always driving, driving, ever driving, bearing the lode and raising the arch under which everything happens in CAVE.