Catching up with Chicano Batman 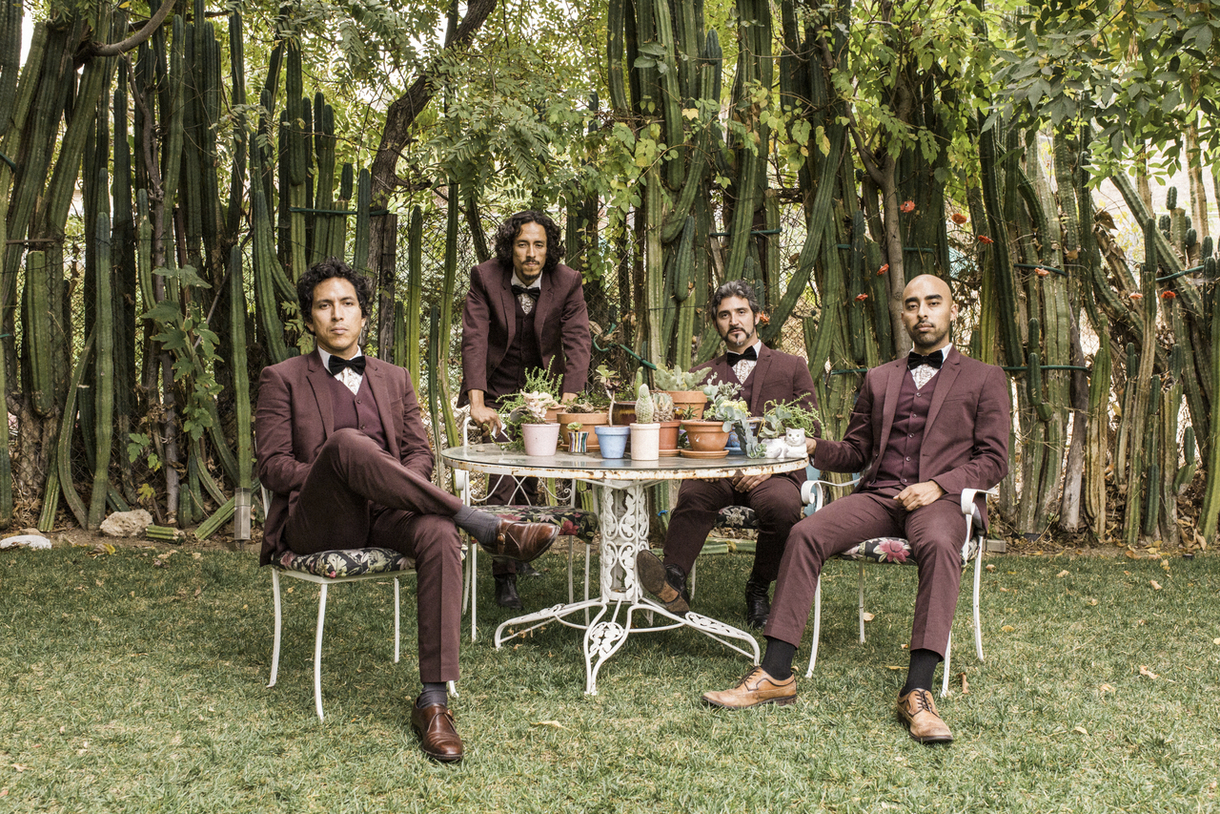 Chicano Batman is a Los Angeles band formed in 2008. Singer Bardo Martinez, guitar player Carlos Arevalo, bass player Eduardo Arenas and drummer Gabriel Villa serve up a warm myriad of sounds and influences, touching on tropicalia, soul, psych, cumbia and funk. They have recently released their third full length, Freedom Is Free. As a band, it is their most political and fully realized statement yet. We caught up with bass player Eduardo Arenas as the band were making their way to San Jose.

Northern Transmissions: Tell me about Chicano Batman’s song writing process, how collaborative is it? How did these songs on Freedom Is Free come together?

Eduardo Arenas: Well, the primary songwriter is Bardo Martinez, the lead singer of the band. A lot of songs he brought in, and most of them were done. We would just hone in as a band, on our instruments and help to craft the aesthetic. Some of the other songs, Carlos would come in with a great riff and a lead melody and we all just fell through and connected with that. I brought in a few sketches to build on as well. So with Bardo taking the lead with Carlos and myself and Gabriel laying down the rhythmic foot print – we took those songs, about 14 songs, and we took them to a studio in Queens, NY with Leon Michels (Sharon Jones, Black Keys, Lee Fields). This is the first time we have worked with a producer. We would listen to one song a day with him, and he would address anything that stood out, and we would record one song a day. His Aesthetic was really dialed in and we trusted him and he knew we were on to something so it was a great process. His studio is also a fully analogue studio so that really contributed to the sound as well.

NT: I feel like this new album has a more soul, R&B vibe than previous works, and you mention working with Leon for the first time in his studio, is that a sound he was really able to coax out of you guys given the artists he’s worked with in the past?

EA: Definitely. The same equipment he’s used on classic soul records, it was used on our songs. The same engineer. It was really easy, going in with his team who are really well oiled. They know how to use all this equipment from the 60’s, 50’s, 40’s and get the most out of it. It wasn’t about a Hi-Fi sound it was about the grit and the warmth. They had so many tools at their disposal and whatever we needed we got. And every day we would go in with a new song and work on only that, imagine that you know, whatever that song needed that day we got. So it was a 13 day process. It was like we were at Disney Land. Before this, we would record 14 songs in 2 days. This time we could really live the compositions a bit more.

NT: Did these extra resources liberate the band to fully realize their sound a bit more or did the whole process and experience flick a switch in a different direction all together? Do you see Freedom Is Free as a breakout or an evolution?

EA: I don’t think its a breakout, I mean it’s been 10 years getting to this point. I think we got out all we wanted to get out on the first 2 albums, and proudly so. You know, we give the best we’ve got with the time we’re given. I think any person living in this world is trying to do that. And working with Leon, our visions just paired perfectly. I think this is just making big steps in the right direction and meeting all the right people along the way.

EA: Oh absolutely. You know there was no conscience decision to release around the new president, there was no agenda to be anti Trump or anti anything, these songs were written in 2015. So all the messages that are there are just reflections of our ideology. What you get now is 4 successful Latinos, people of progress. And its challenging, its challenging to shift the staus quo. And its good, we’re not apologizing for anything we’re doing and I think we’re doing it well. But when you have 4 Latinos singing This Land Is Our Land for Johnnie Walker, of course not every body’s gunna like that. And congratulations to us.

NT: Does your role as successful Latino artists seem different now, given everything thats happened politically with Trump. Does it mean something now that it might not have a couple years ago?

EA: You know, it does. I can’t deny that it is. And I think it provides a good opportunity for a lot of people and organizations to come together on a lot of these issues. Thats one positive thing that a shitty administration is going to bring for the next 4 years.

EA: I think so. Artists, athletes, actors…at some point Tom Cruise will fart and everyone will love him for it because he has that kind of capacity and that kind of reach. Certain athletes will wear the ‘I Cant Breath’ shirt (protesting NYPD killing of Eric Garner) and people will say “damn, hell yeah….there’s a consciousnesses behind these uniforms and superstars”. And people want to see that we’re all humans. People want other people to be more human no matter what position you’re in. And thats good. And when someone can be in a position to say something and reach a lot of people, that’s amazing, as long as its sincere and from the heart. If not, if its phony and you’re capitalizing on art and politics…you’re just giving away your soul at that point.

NT: Ok, so speaking of giving away ones soul…The band did Coachella, and will do it again this year, you did the commercial for Johnnie Walker, you did the big tour with Jack White, and right around this time there will be fans who say “Oh no, Chicano Batman is selling out”. Do you guys think about that?

EA: We think about it. We don’t let it get to us. We have been here for 10 years, we do this for a living. With our whole community we’re getting praise for what we’re doing. You know we started with just this cult following for many years and now we’re going to play with Fillmore and we’ve sold it out. And we go to these shows and recognize so many people because we’ve played San Francisco so many times and they’ve been with us along the way. We haven’t taken any short cuts. These people have been with us and we’ve built this trust with our fan base. They’ve seen our growth and our sacrifice. We’ve got a band of 4 people, two of us have a masters degree and the other two have bachelors degrees – you know, did we sell out when we ditched those to go play in little bars all across the country? I mean theres a connection we have to doing this line of work thats directly connected to the passion in our hearts. And we’re not going and doing Nike commercials, or Gatorade. The things we align ourselves with are directly in line with what we believe.

NT: I heard it said that Chicano Batman is ‘reconfiguring vintage styes for young ears’. Was this a conscious effort to kind of revamp the music you grew up on or is this just what comes out of you guys naturally?

EA: Um, I think naturally we have that connection to each other. As adults now, and those records we heard growing up – not even by choice. You go to the kitchen and mom’s cooking and there’s this music playing. It reminisces and strikes this chord of nostalgia. I think we just like this style of music. For us, the early 70’s late 60’s music just seems to be where the ideas start brewing.

NT: I think for a lot of younger, maybe non latino fans who hear Chicano Batman and didn’t grow up with this music, the latin soul, the tropicalia, you might be their gateway to a whole different world of music. Kids will be checking out the stuff that you grew up on, on account of the music you’re playing. How cool is that?

EA: That’s amazing. And I think they’ll end up for themselves, at the end of maze, going back to American black soul music. That’s what primarily inspires us and thats what inspired all the Latin American bands that did the ballads and the funk. The path always leads to black music, and I hope that can be their awakening because that’s what helped shape the culture of the music world undeniably.